A New Shadow Over Ukraine's Children | UNICEF Canada: For Every Child Skip to main content

A New Shadow Over Ukraine's Children

The empty playground and shell-scarred buildings that Daryna passed on her way to school were a daily reminder of how six years of conflict have ravaged eastern Ukraine and devasted the lives of the region’s children. An entire generation is growing up to the sound of shelling and gunfire, a nightmarish soundtrack to childhoods filled with danger and uncertainty.

“It’s not safe here at all,” says 13-year-old Daryna. “Sometimes you hear shelling. [You] get anxious when you hear that sound.” 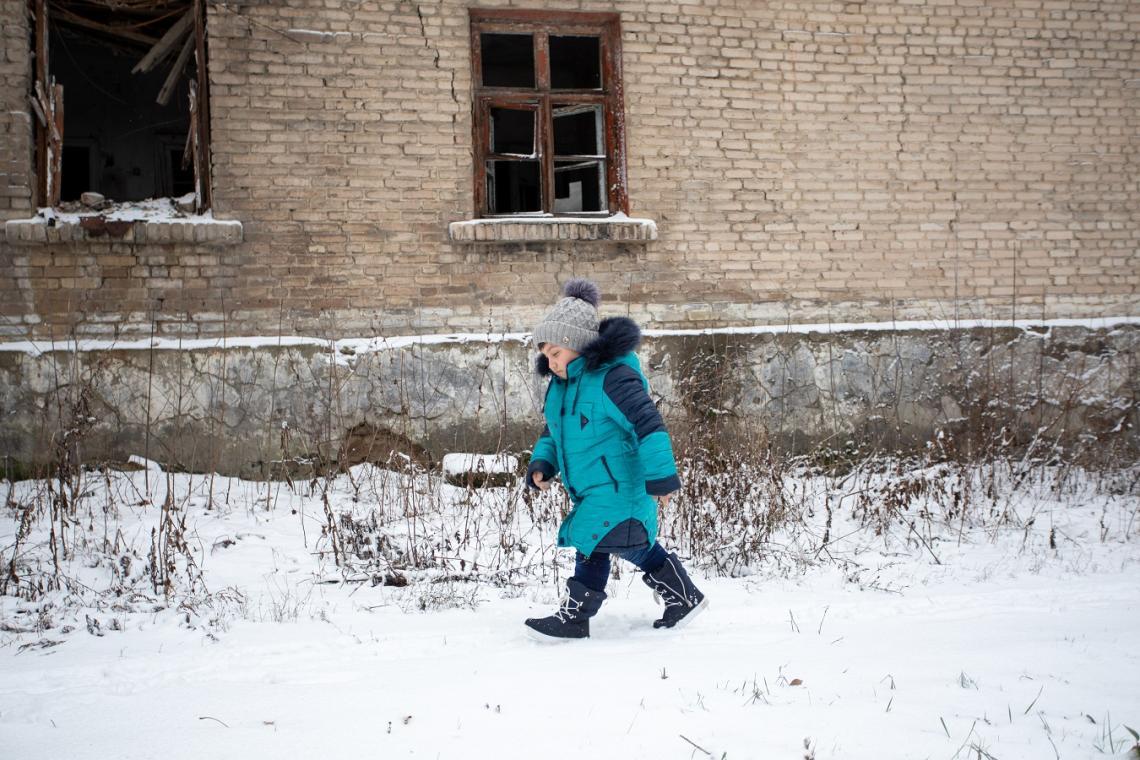 But the global spread of another  threat is upending the lives of children in new and unpredictable ways. Now, as schools across Ukraine have shut to prevent the spread of COVID-19, children in the east of the country have lost one more connection to a sense of stability.

Life in a ghost town

Daryna lives in the mining town of Zolote, near the so-called line of contact, which divides the government and non-government areas, and where fighting is the most severe. Zolote was once home to almost 5,000 people, but six years of fighting have forced many to seek work – and safety – elsewhere. Today, less than 300 people live in the town. For those families that remain, navigating streets, fields or even back gardens requires vigilance for mines and other unexploded ordnance. 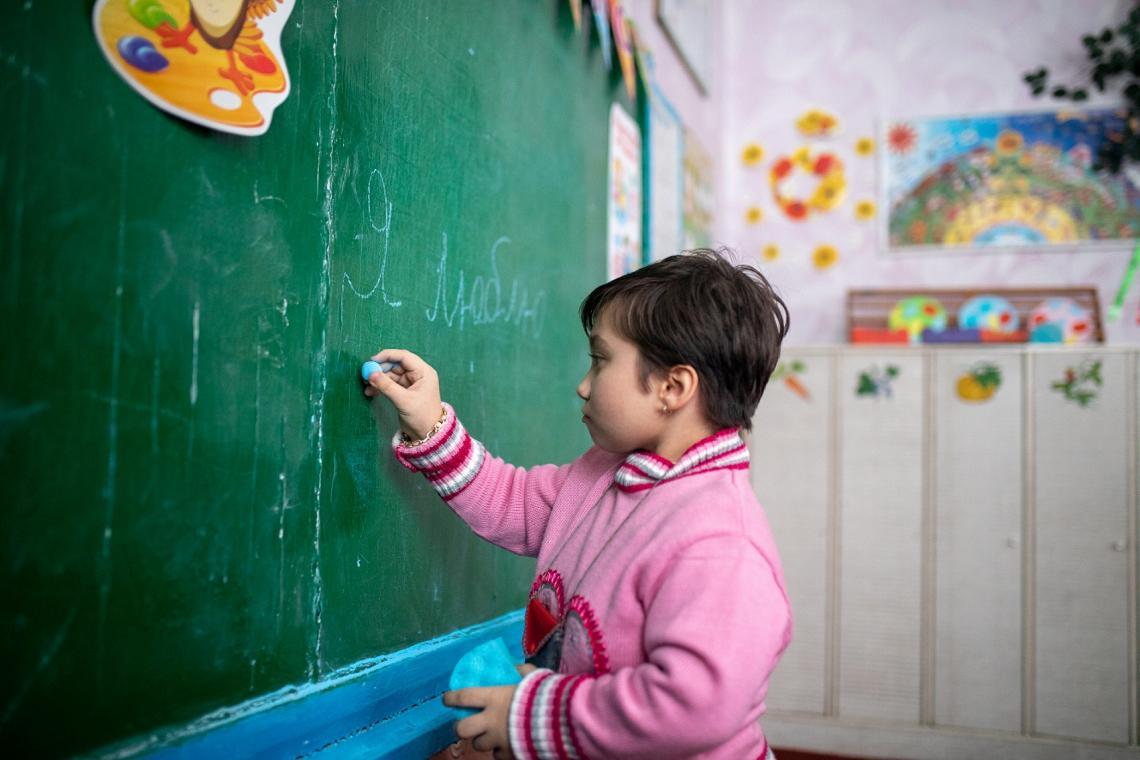 The walls of Daryna’s school are decorated with paintings, but these colourful images bear troubling reminders of the looming threat. One picture includes a number for children to call if they see a landmine or other ordnance outside, an all-too-common occurrence in one of the world’s most mine-contaminated places.

Then there’s the shelling. More than 750 educational facilities have either been damaged or destroyed since the conflict began in 2014, including Daryna’s school – the ceiling of one floor collapsed after a round of shelling.

But despite the dangers, Daryna had found going to school comforting. She enjoyed being able to see her friends and attend art classes, where she would make clay figurines.

“I live out my dreams through the clay,” Daryna says, showing off some of the animals she has made. “There’s too little creativity in life.” 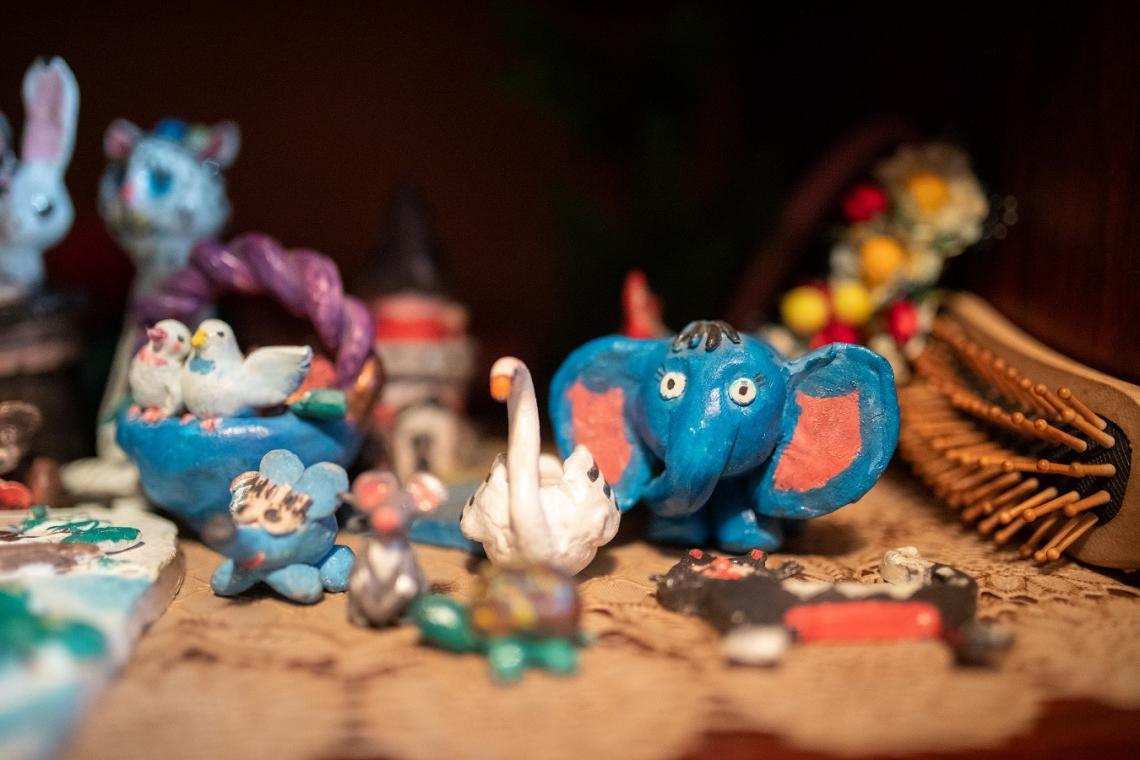 The windows of the school have been boarded up to protect children from shrapnel and stray bullets. But even in these grim conditions, going to school had also offered a little stability for Anton, a first grade student at the same school as Daryna.

“I like to play ball during breaktimes,” Anton says as he sits on his mother Ania’s lap.

Ania says that her son’s speech was delayed because of the stress of growing up in the conflict, but he has grown in confidence since starting school.

“From the first day, everyone there loved him,” Ania says. “He’s very sociable. He hugs and kisses everyone!” 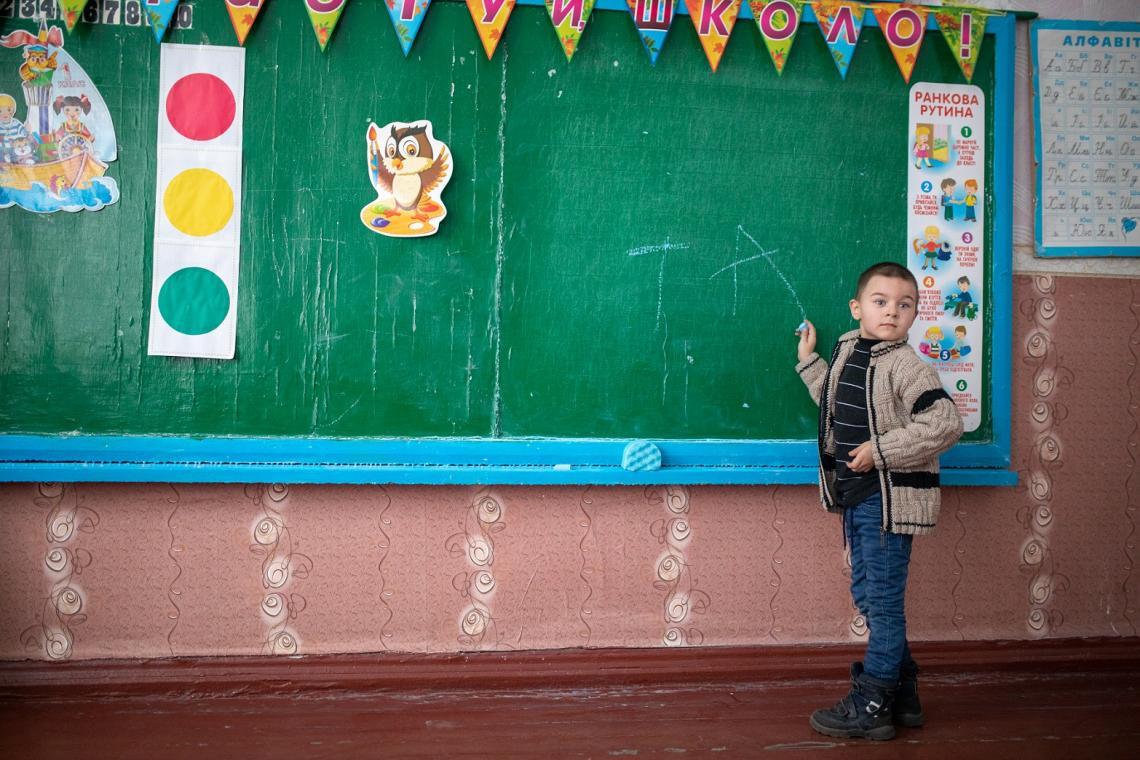 Around 430,000 children living with the psychological wounds of growing up around the protracted conflict will need ongoing support. Across eastern Ukraine, UNICEF and partners provide psychosocial support and mine risk education to children, youth and caregivers. With EU humanitarian aid, UNICEF also supports repairs to damaged schools and kindergartens and vital water and sanitation facilities.

Despite the dangers, the region’s children were determined to continue going to school. But the spread of COVID-19 has done what years of conflict didn’t: forced Daryna’s and Anton’s school to close. In the process, children in towns like Zolote have lost even this small sense of normalcy. 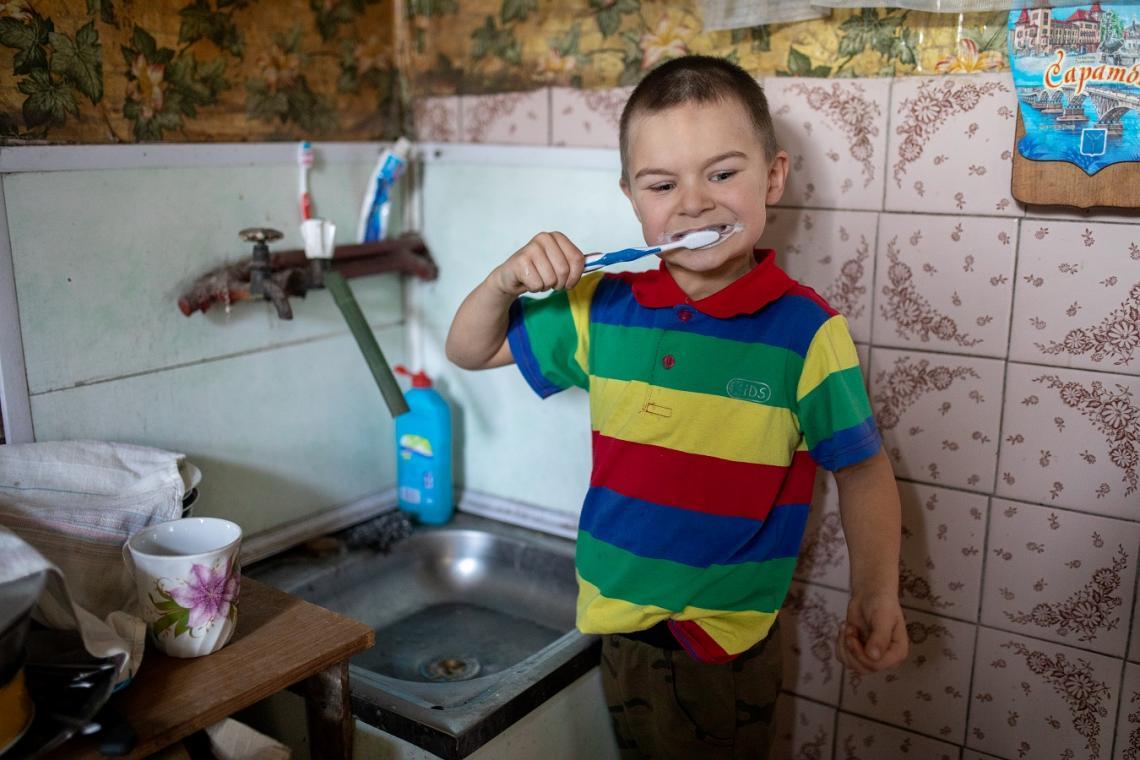 “Anton feels good at school and can play there with other children. At home he gets bored and cries a lot,” Ania says.

Nowhere else to go

Since the conflict began, many people have lost their jobs. The rising prices of essential goods and the cost of repairing shell-damaged homes already meant many families had little, if any, money left over each month. Now, with the coronavirus pandemic to contend with, the lack of healthcare and safe sanitation has left families like Ania’s facing a double burden.

“Everyone who can leave goes,” she says.

But despite the school closure, Ania’s family will, for now at least, stay in Zolote. They have no choice. “I don’t have money to go anywhere,” she explains.

As the conflict has entered another year, and with peace still elusive as ceasefire violations have continued, residents of Zolote face yet more nights filled with the sound of exploding shells. But the lack of a quiet night of sleep hasn’t stopped Daryna from dreaming.

“I hope that one day, this war will be over,” she says. “I want to be a teacher when I grow up, so I can teach singing and art.”