The nowhere land where children on the move are someone else’s problem | UNICEF Canada: For Every Child Skip to main content

(Agadez, Niger) Nothing could be further than from the gates of paradise than this scorching, unearthly wasteland stretching out as far as the eye can see and beyond.

And yet this is it. Hidden in the ghettos, scattered on the outskirts of this ancient turmeric-coloured city, milling about in centres are hundreds of migrants, stranded, with dashed hopes and unfulfilled dreams. They’re on the move to or from neighbouring nations or beyond. Some, but surprisingly perhaps not most, have an eye on the ultimate prize of making it across the burning sands of the Sahara and on to what is fast becoming the elusive Eldorado - Europe. Many children travelling alone or separated, nursing mothers, newborns, and throngs of young men angry that their quest had been cut short. 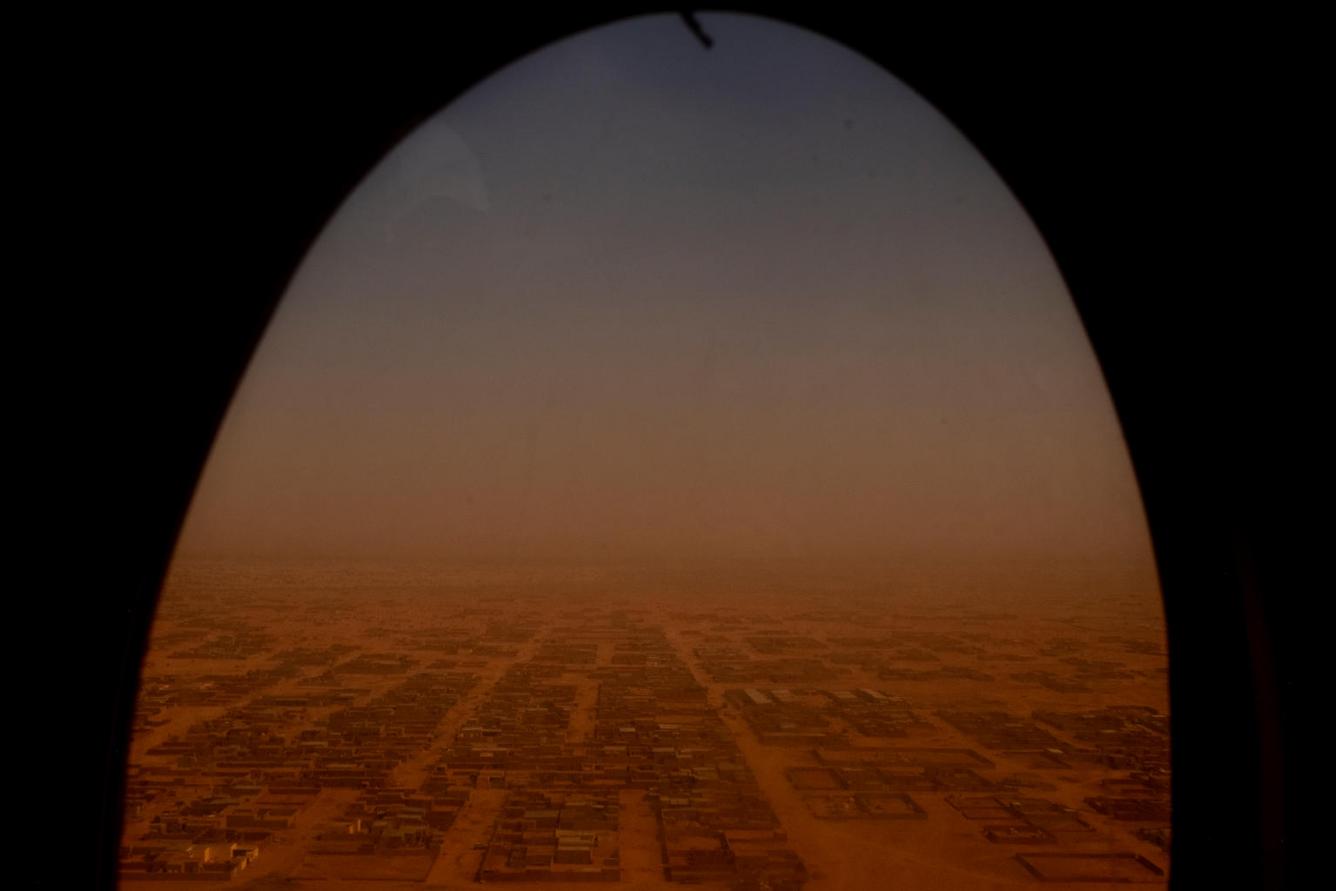 Agadez was once the migration capital of Africa, a crossroads for people on the move, a bustling business hub for smugglers, roadside shops selling masks, and sunglasses for the daunting journey, traffickers awaiting their human trade. Authorities would turn a blind eye then. Now, as Europe and North Africa tighten their borders and close their ports creating drama on the high seas in a general clampdown on migration – this unlikely has become effectively Europe’s new frontier. Arrivals into Italy from January to early June this year were down by two thirds compared to the same period last year when 60,000 crossed over from North Africa.

Since November last year, more than 8,000 West Africans, including 2,000 children, have been returned to Niger from Algeria, with another 900 refugees and asylum seekers from East Africa transferred from Libya awaiting cumbersome and slow resettlement or family reunification processes to determine their future. 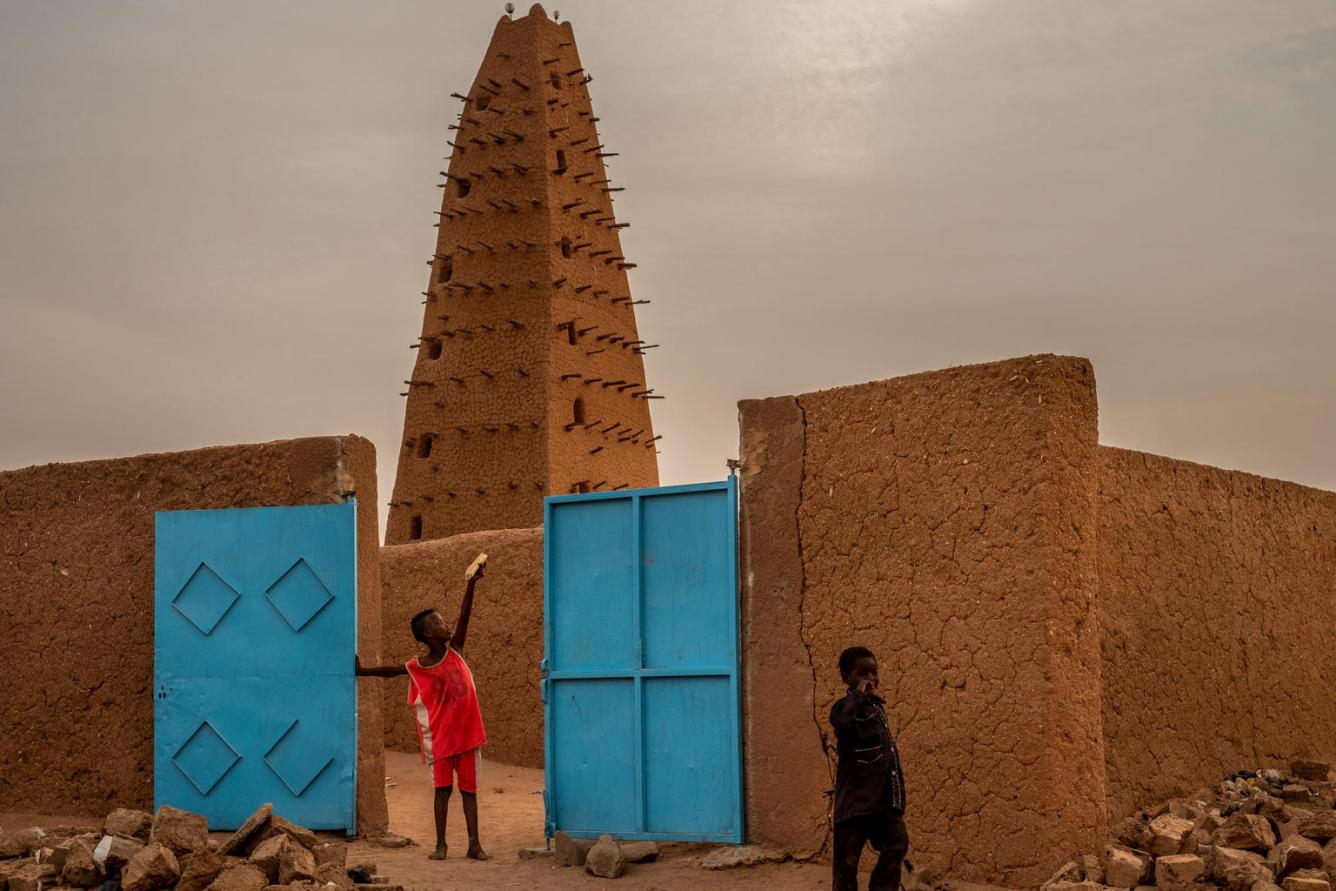 Niger is one of the poorest countries in the world yet is bearing the brunt of the ‘out-of-sight, out-of-mind’ policies by richer countries.

Hastily stitched together agreements between one country to the next – EU-Turkey; EU-Libya; France-Niger; Algeria- Niger - are making migration someone else’s problem, pushing migrants from pillar to post, farther south. Children pay the highest price with little or no proper structures to keep them safe.

The pushbacks have meant the stakes are higher and the routes riskier. 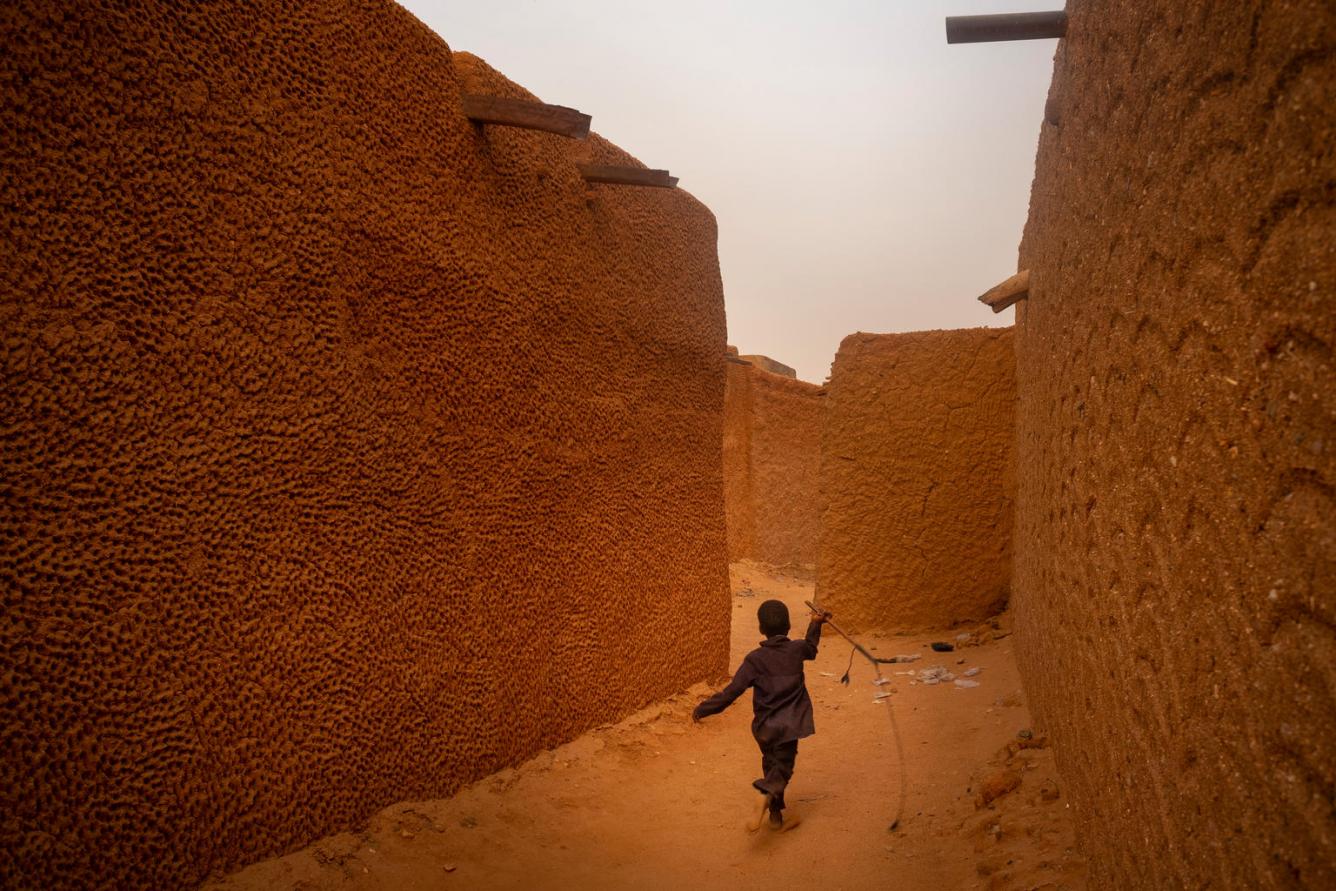 In the flurry of a dust storm, of flesh-baking heat, we met a young Guinean furious for being dumped over the border from Algeria where he was scrapping out a living on the streets doing odd jobs. He went on a wildly gesticulating tirade but his words were as wise as they were distressing: “The desert has become a cemetery for our African brothers and nobody cares.”

He was among those returned from Algeria, left in a nowhere land of the desert in temperatures of 48 degrees celsius miles from the Niger border, forced to walk until they could find transport and shelter. Many came from within Niger, the impoverished county of Kantche state in Zinder with its long-held reliance on income from begging.

Ironically when the migrants are brought to Agadez onto an bone-dry open plain with a few threadbare tents, local children circle around with plastic begging bowls - begging from the returned beggars.

It’s a motley bag – some could even classify as refugees. I met Liberians who fled their country during the Ebola crisis, Guineans fleeing hard times, Nigerians fleeing Boko Haram and others fleeing the torment and hardships in Libya.  Three UN agencies – UNHCR, IOM and UNICEF – have stepped up the response in Niger  yet too many fall through the cracks as they’re bundled up and off in this vast migrant heartland. One young mother nursing her 2-week-old baby was embarrassed that she had not yet managed to shave the new-born’s thick head of hair according to tradition. 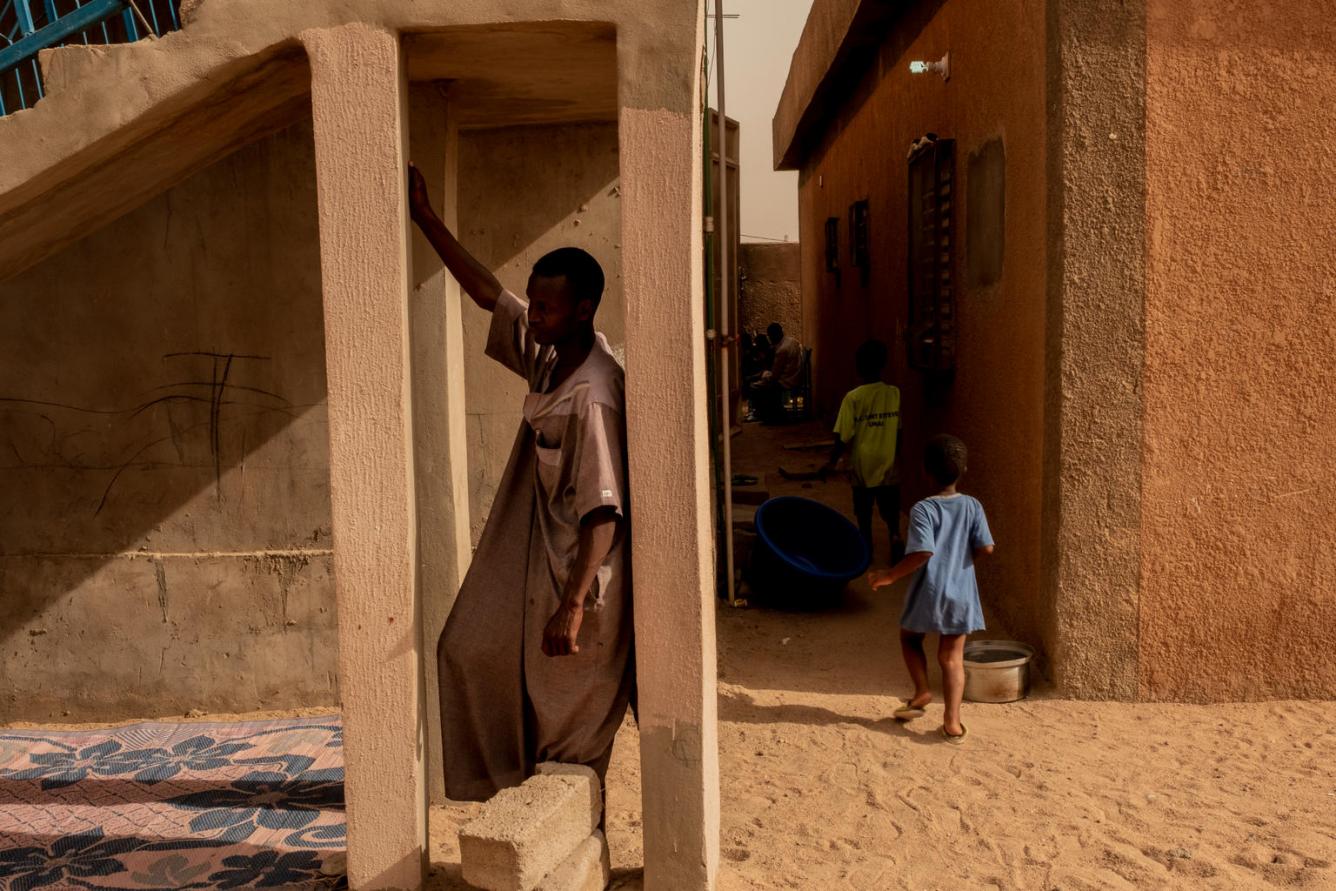 “The enforcing of the anti-migration law has changed the dynamics in the country. We’re seeing a huge spike in unaccompanied children, and those involved are using routes where they cannot be tracked, and it’s far, far more dangerous.” Said Dan Rono, a child protection officer with UNICEF “It’s a tough journey for an adult, so you can imagine for an 11-year-old, it’s almost impossible for that child.”

In April alone there was an increase of 14 per cent over the previous month in people transiting through Niger with around a third children, exhausted and traumatized. The true figure is likely to be higher as many children go undetected or hide. 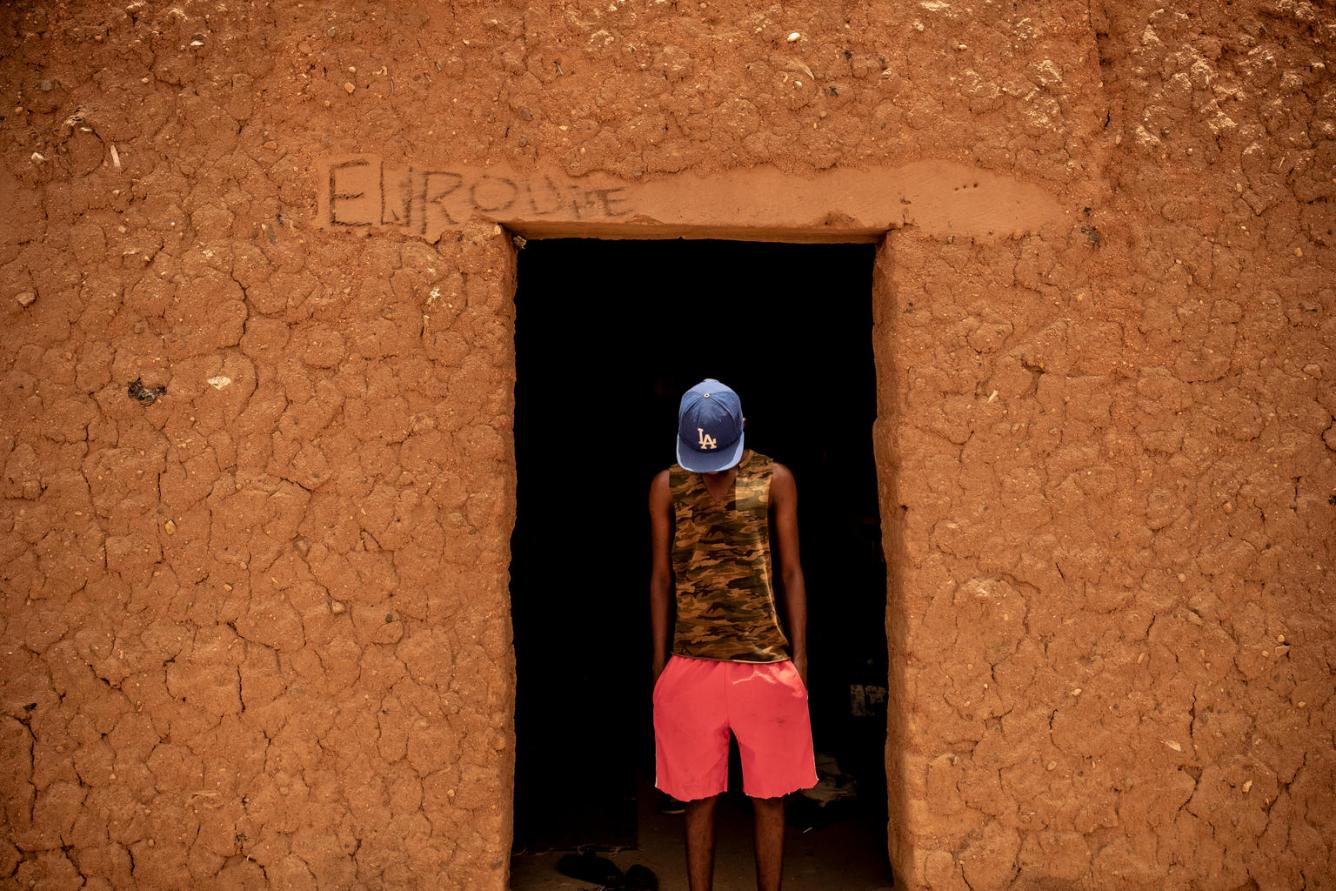 Omar, a 14-year-old from Sierra Leone, was one of those hidden statistics. He’s a gangly, awkward early teen in a Yankees cap, sleeveless vest, baggy shorts and flip flops, pretty much all he owns.  He is under the radar in a place they call the ‘Ghetto’ outside Agadez, waiting for the chance to cross. He left home because his father was not paying for his school fees.

“I have made my decision to go to Libya, or to go to Europe to have a good life. May God save and guide me I will not go back home until I make it, to become a good boy so I can support the family behind,” said Omar. “For now, if I stay home I won’t be serious ok? I’ll become a bad boy. I will smoke, drink... So, I don’t want that life ok? I don’t want to become a bad boy. But if I go Europe I will continue my school. I will continue playing football again”.

UNICEF has found in studies that although most children on the move stay within Africa and have no desire to go to Europe, of those who say they do want to, like Omar, around a third say it is for an education.

A former smuggler, Dan Ader, who’s seen his lucrative business crumbled into the desert dust since the clampdown, told us:

“There are so many deaths because there are thousands of routes. Now if your GPS has a little glitch you’re finished! You will not find your way again.” 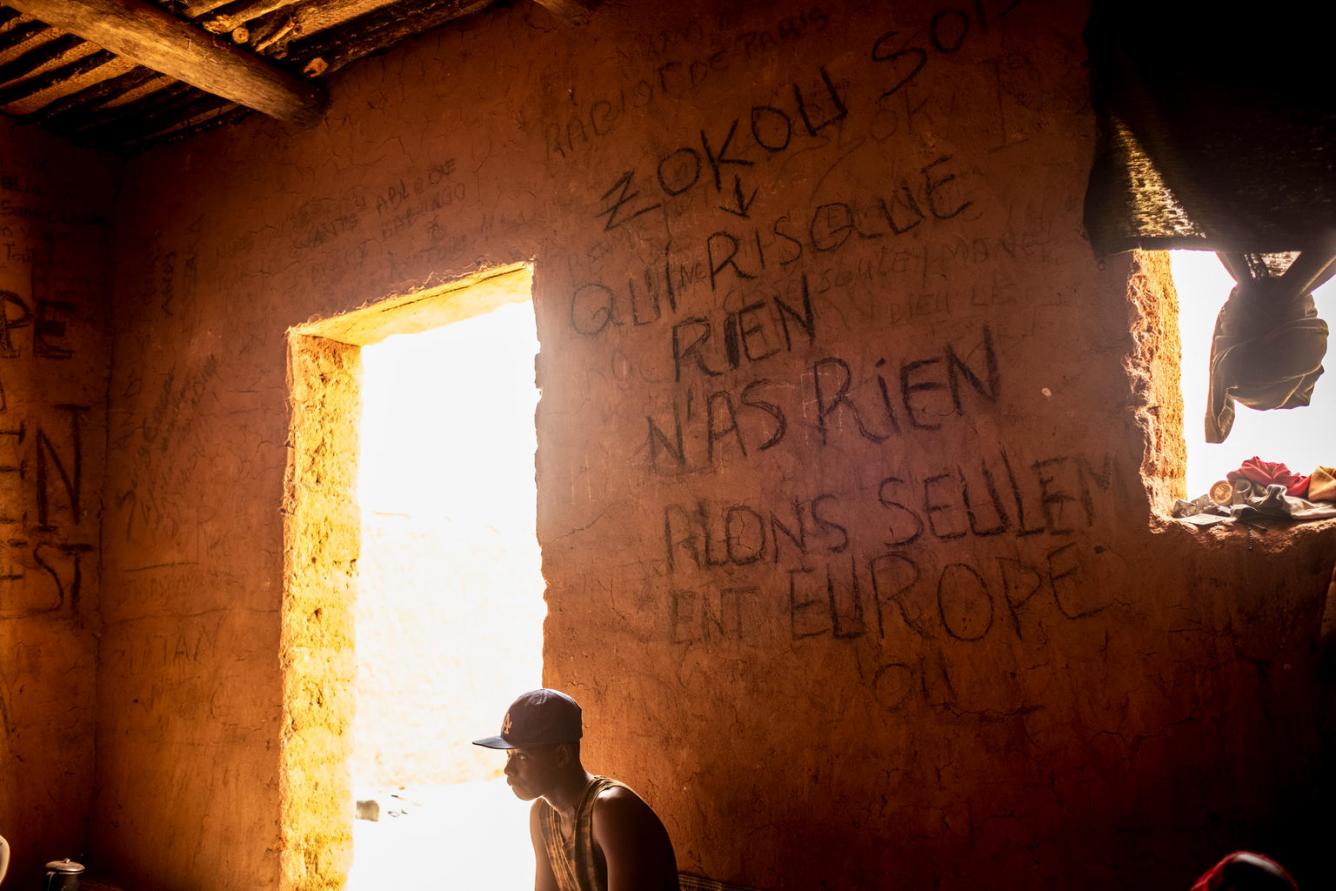 It doesn’t stop them trying.

Desperation and dreams turn then into philosophers and poets like the scratchings on a prison cell, the graffiti on the grim ghetto walls, tells their stories scrawled in large charcoal:

(Europe or bust. God is there.)

(It is better to die at sea than to die in front of your mother—with nothing.)

Migration is as old as humanity itself here – a rite of passage for many into manhood, and simply a way of life in search of a better life – and closed ports and closed borders are not likely to stop this. Africa is the youngest and fastest growing population in the world, the north is ageing. Some say ‘Africa is sitting with its bags packed.’ The scrawling on the wall of the filthy ghetto in Agadez is a stark reminder of one of the reasons:

(Africa is rich, but its children are leaving because of bad governments.) 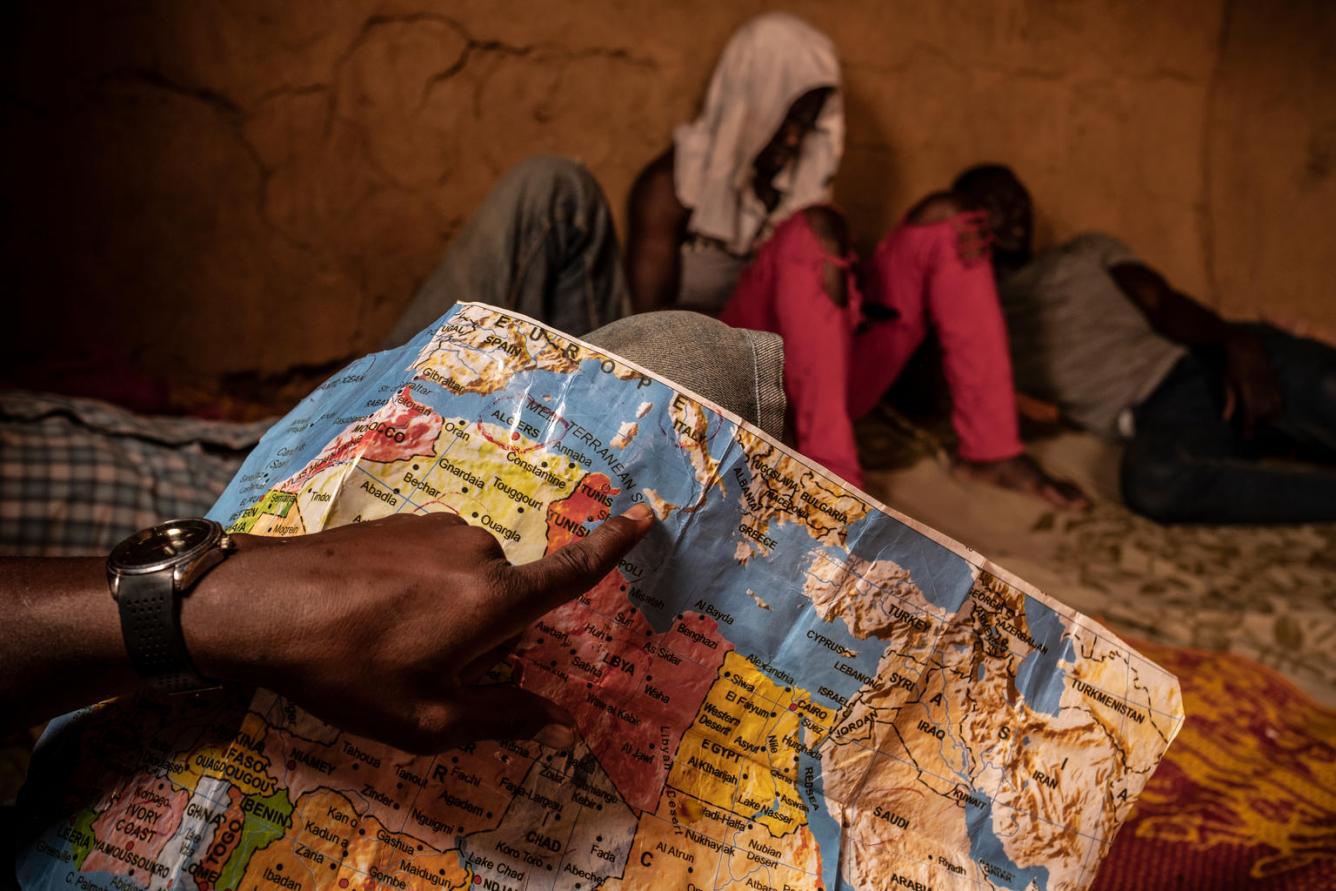 But yet only some 15 percent of those on the move in Africa, express any interest in going to Europe.

So managing migration is truly global and now as the Global Compacts on Migration and Refugees are being finalized, the EU and other bodies really need to seize this moment to put the needs of children uprooted before national interests; commit to predictable cross-region action to keep children safe and families together and invest in countries like Niger and others in the Global South that take in far more refugees and migrants in a month than the Global North now does in an entire year.

For most then the true paradise lost, is being uprooted from your home and your loved ones – especially for children alone. They look now to powerful member states, to the European Union and to the African Union to put in place a proper migration system that doesn’t dismiss them like the wind that carried them to foreign shores. 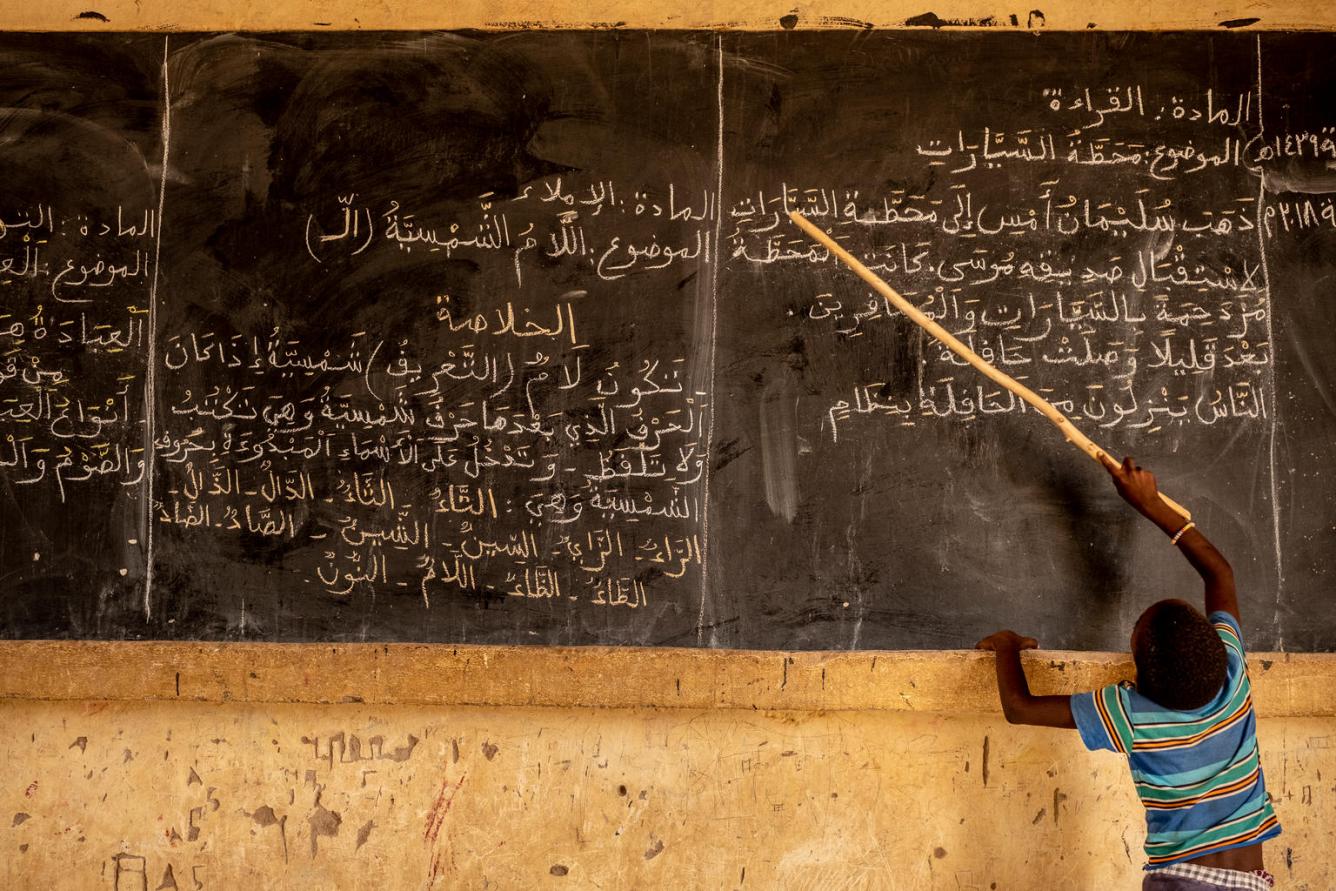 UNICEF and partners are working in Niger to provide education and support to these children in need. UNICEF has provided support to the Government of the Niger to set up 42 temporary classrooms for 2,100 children. Through this same strategy, the government has reached 2,492 children. The goal is to educate displaced children so they can be integrated into the regular school system.

UNICEF-supported youth centres in Niger are also helping vulnerable children get out of trouble and get back on track. All children are welcome at the centre, regardless of whether they are in conflict with the law. Volunteers offer support and advice, and they are often the children’s mediator with the police, court system, and employers – and also with their families.

The UNICEF-supported SEJUP (Educational, Preventive and Judiciary Service) centres are more and more popular and effective, playing a major role in helping children who are in need, homeless, abandoned by their parents or in conflict with the law.