We didn’t know where to go: Syrian refugees on the move | UNICEF Canada: For Every Child Skip to main content

We didn’t know where to go: Syrian refugees on the move

It’s starting to rain here.  Last week, Kawthar, 25, and her daughter Barcham, 2 and a half, had a home. Today they are living in a tent. The rain falls quietly but the wind is loud, whipping the flaps of the tent around wildly as we sit inside it. This is one of many tents that have sprung up in the last few days in Barderash camp, in Northern Iraq, not far from the Syrian border.

Barcham and Kawthar are from the Syrian city of Serekaniye, (also known as Ras Al-Ayn). Close to the Turkish border, it has become a flashpoint of the recent conflict, forcing many families who lived there to flee.  Approximately 176,000 people (including almost 80,000 children) have been displaced inside north-eastern Syria just in the last two weeks.

“The air strikes were happening in front of us, so I picked up my daughter and ran. All we could hear was the sound of bombing. We were walking and in front of us was bombing. We would stop, and cry, and we wouldn’t know where to go.” 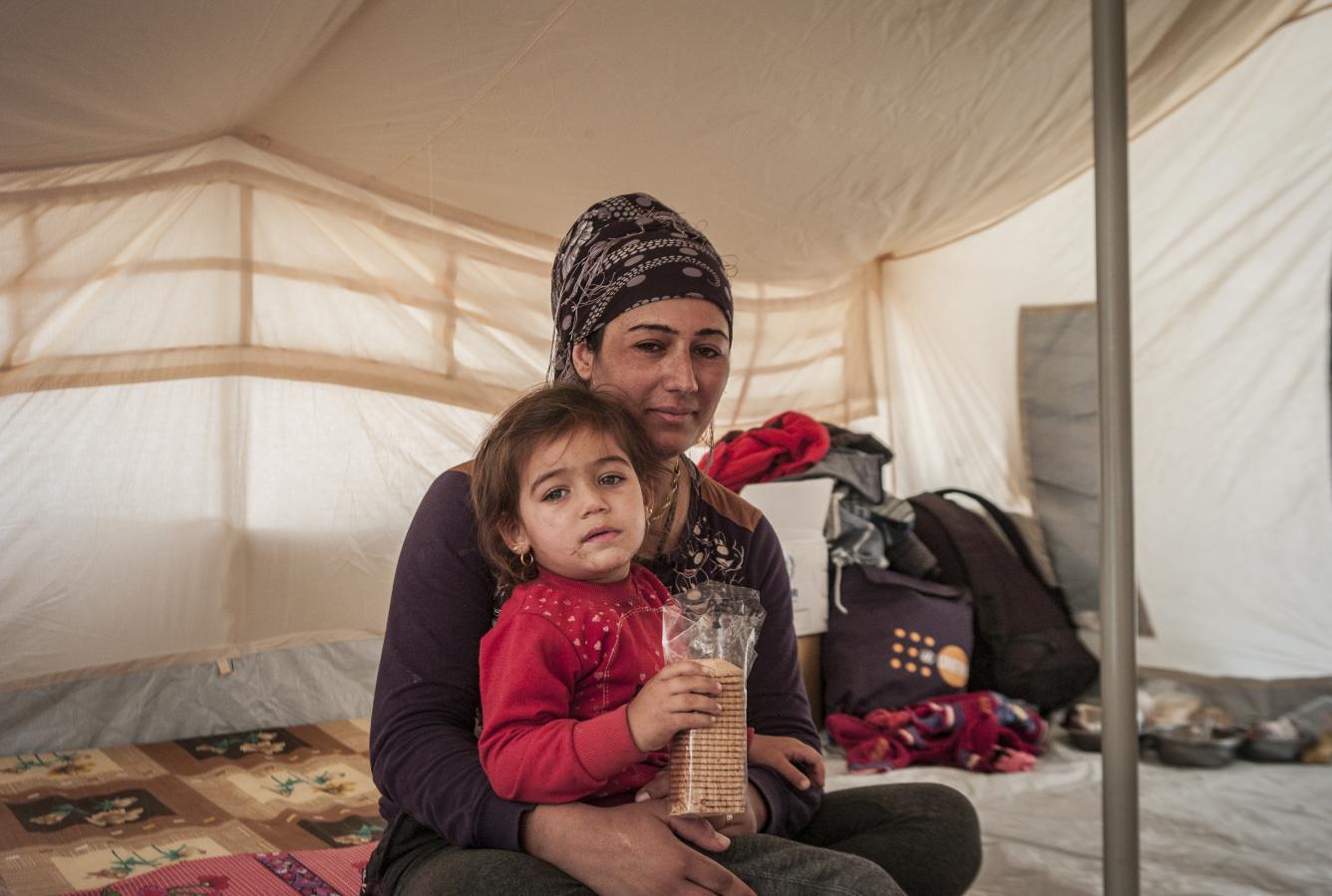 Kawthar and Barcham outside the tent they are sharing with Kawthar's sister in law and her children.

Like many other families affected by the current crisis, Kawthar’s family has been displaced multiple times.

“Wherever we go there is war"

"We’ve been in Darbasieh [town in northern Syria], we’ve been in Hassakah [city in Northern Syria], and there were attacks there, and there were no other places to go” she said. So Kawthar made the difficult decision to flee to Iraq. The official border crossings are reportedly not open for Syrians, so many families who want to flee are forced to pay smugglers to get them across the border. It’s a difficult and risky journey, and Kawthar tells us that Barcham cried the whole way. The little girl sits quietly on her mother’s lap now, clutching a packet of biscuits with one hand and reaching up to touch her mother’s cheek with the other. “For her sake, I had to leave. You can’t imagine the situation our kids are in,” Kawthar says softly.

When we ask what her biggest hope for her daughter is, at first Kawthar doesn’t understand the question. Perhaps it is a strange place, a strange time, to ask about big hopes. The tent we sit in together is empty, except for a mattress, a small backpack (the size of a school bag) and some relief items piled in a corner. Like most families who crossed the border on foot, Kawthar didn’t bring much. “I just brought Barcham and three changes of clothes, and I put my bag on my back and we ran away,” she said. Humanitarian agencies have provided families with some basic relief items like kitchen sets and mattresses, and UNICEF is planning to distribute hygiene kits later today.

“Many of the children who are now in Baraderesh had just returned to school for the new academic year when the violence started. They’ve had to leave behind everything they know and flee to safety. They are likely stressed and in a state of shock. UNICEF is working around the clock to establish basic services in the camp, including education facilities and child friendly spaces where children can learn and play in safety, as well as receive specialized care for those with specific needs,” said Hamida Lasseko, UNICEF Representative in Iraq.

According to camp management officials, this camp (which was originally established in 2015 for Iraqi families fleeing Mosul) had been empty for two years, but was re-opened just days ago, this time for families fleeing the conflict in northern Syria. There are more than 2,000 people here so far, with around 700 individuals arriving each day. It’s a hive of activity, and we can hear the clang of shovels, people working to clear the ground and put up tents. Some young men in the tent next to Kawthar’s are helping the families in the tents around them, clearing rubbish off the ground and setting up a row of bricks at the front of people’s tents, like little porches. This way, when this still-light rain turns the dirt around the tents to mud, the children won’t slip as they scramble in and out of their tents in the rain.

These are the small hopes, the small goals, for now. And Kawthar’s biggest hope for her daughter?