UNICEF Canada originally published this blog for International Day of the Girl in 2020. Amidst the increasing conflict in Afghanistan, we were made aware of a CBC interview with U.S.-based human rights lawyer Kimberley Motley who had been in contact with the Afghan Dreamers.

As of August 20, 2021, an estimated 12 members of the team have left Afghanistan, with many arriving in Doha, Qatar, where they will remain for the foreseeable future to continue their studies.

Half of the population of Afghanistan - more than 18 million people, including nearly 10 million children, - need humanitarian assistance. For all these people, UNICEF requires access and all the guarantees of safety that come with that access.

When the idea of making a ventilator was assigned to Somaya,17, and her fellow teammates, only a few people believed it was possible.

"We made it. Our dream became a reality," says Somaya with excitement. "It is possible because of our determination, hard work, and dedication."

As part of its Adolescent and Youth Engagement Strategic Framework, UNICEF is supporting the Afghan girls' robotic team.  The team, which is known as Afghan Dreamers is comprised of five adolescent girls aged between 14 and 17, led by Somaya.

Living in the western province of Herat, where Afghanistan's first case of COVID-19 was reported, members of the team were tasked to design a ventilator.

"It was not a hard decision to accept the challenge,” says Somaya.  “Since the ventilator can save lives amid this pandemic, we accepted the responsibility.”

The Afghan Dreamers initiated their project by conducting research online, looking for an open-source design ventilator.

"It was not an easy task," giggles Somaya. "We were racing against time to come up with a prototype of our own to support the COVID-19 response in Herat province."

"We used locally available second-hand car spare parts to assemble the device," says Somaya. "We worked around the clock to fill a gap on a direly needed ventilator to treat COVID-19 acute cases." 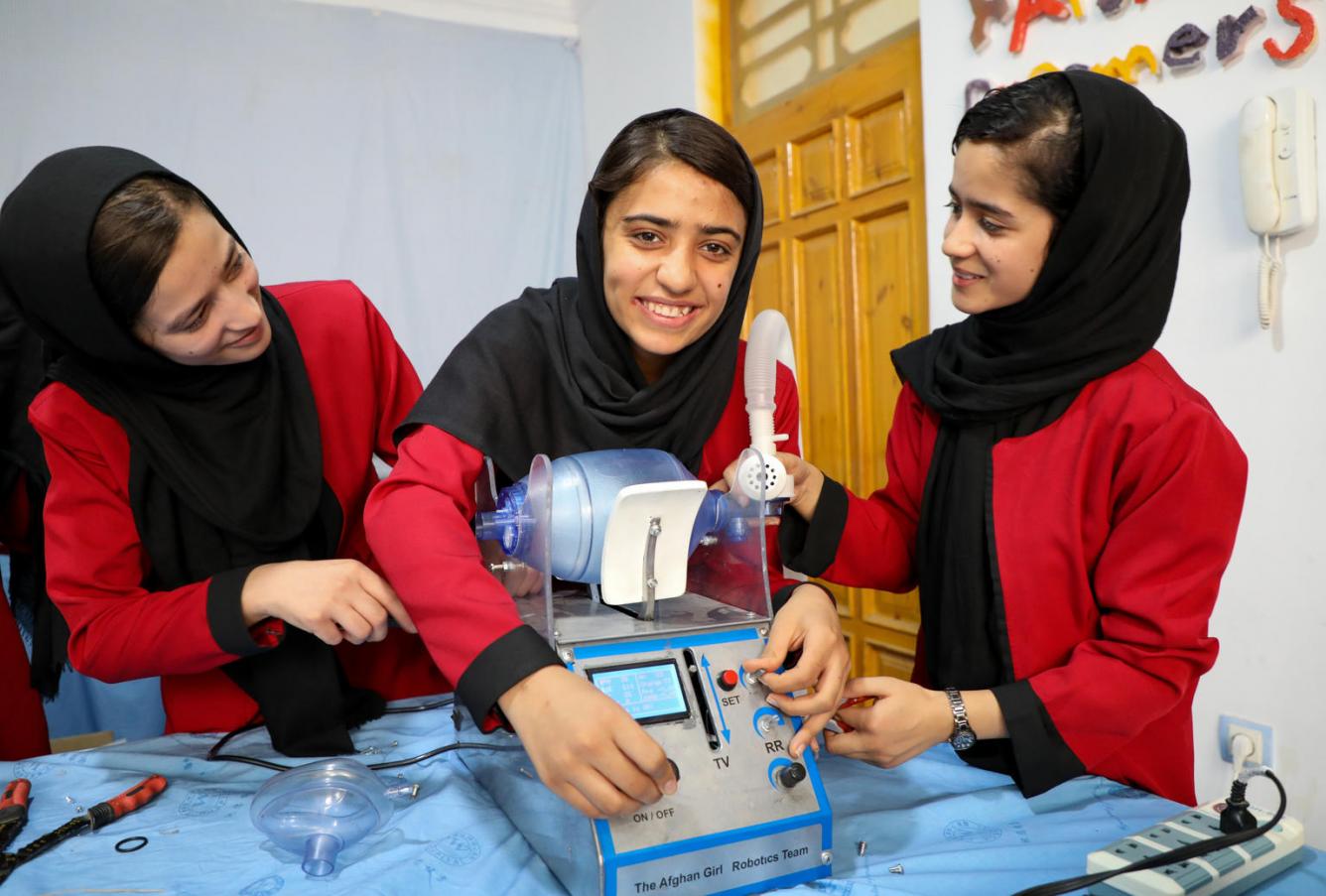 The Afghan Dreamers' journey in developing the ventilator seemed insurmountable, but their hopes and courage remained alive. The girls went through numerous ups and downs. The unavailability of critical tools and required parts in the country, and most importantly, some team members, including Somata contracted COVID-19.

"There were days where the project did not progress as desired, simply due to missing simple tools such as a screw," says Somaya. "And what made it worse, is that shops were closed due to lockdowns."

To overcome such challenges, Somaya and her team members had to call shop keepers to beg them to open their store. "We never gave up," she says. "Our motivation to save lives was an unquenchable drive."

The most challenging part of the team's work was to find two sensors: a pressure transducer that converts pressure measurements from the breath into electrical signals, and a microprocessor that processes those signals into a pump of air.

"With UNICEF's support, we finally got a pressure transducer to get the job done."

In the coming weeks, the team will travel to Afghanistan’s capital Kabul to present and test the device in the Ministry of Public Health team's presence. They will be the first group of adolescent girls in the world to design a ventilator.

"We hope that the Ministry of Public Health will approve the prototype so that local factories can replicate the ventilator," says Somaya with optimism.

Once approved, the prototype will not replace a real ventilator.  But, it will be used in emergency cases, where no ventilators are available.

The vast majority of girls in Afghanistan are prone to child abuse, including child marriage, and are faced with a life confined within the four walls of their houses.  Somaya and her team are proud to reflect a different story about adolescent girls in Afghanistan.

"I had classmates who dropped out of school due to early marriage," says Somaya with a sigh. "I know how much they loved to continue their education and reach their full potential, but they could not."

A UNICEF report showed that girls account for 60 per cent of the 3.7 million children out of school in Afghanistan.  In some of the worst affected provinces, up to 85 per cent of girls do not attend school.

"I hope that our initiative will inspire parents to keep their children, especially girls, in school and to help them realize their dreams," explains Somaya. "I want to become an electronic engineer in the future, and I am blessed to have the full support of my mom and dad."

Donate today to help children and families in Afghanistan >>