Haiti: Land of Dreams | UNICEF Canada: For Every Child Skip to main content

It is hard to comprehend what the earthquake was like.  “I was in the market,” one of our UNICEF colleagues told me. “Everything shook. There hadn’t been an earthquake like this here for 200 years; we didn’t what was happening.  I thought it was the end of the world.  Everyone was grey, covered in dust, there were bodies everywhere.  It was a lottery.  Maybe you lived because you had stepped outside a building just before it fell; maybe you died because trees fell on you as you walked on the street.  It was just a lottery.

“The official statistics say 220,000 people died.  I was there – I think the number was much higher.”

How can any society overcome this – about a quarter of a million people killed and its major city half destroyed in just 45 seconds?  I wouldn’t think it possible.

But, with the fifth anniversary of the earthquake coming up on Monday, I must say that the resilience and strength of the people here is remarkable.  The city looks like it did before the earthquake.  I don’t want you to think that the streets are perfect and all homes are rebuilt – after all, this was and still is the poorest country in the Americas – but buildings are being repaired and rebuilt, there is some new construction too, and the tent cities, which used to be everywhere around the city and, at their peak, housed 1.5 million people, are now down to less than 80,000.

That’s only the physical part of it though.  The foundations are being laid for a more hopeful future. Through education.

But this growth in educational access has brought its own challenges.  We built almost 200 school buildings after the earthquake but with so many more children in class, more trained teachers are needed.

We visited one of those schools today.  Up on the side of the mountains surrounding Port-au-Prince with a stunning view over the city.  School starts back next week but a handful of children had turned up to help get the school ready for the new term.  They are proud of their new school and how it looks. 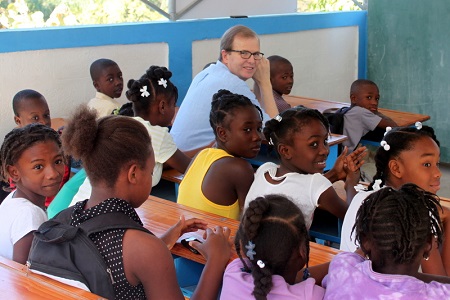 Many of the teachers in community schools like this are willing and eager but they haven’t been professionally trained so we have been developing in-service workshops to improve the quality of education as well as the quantity.

“Teachers today need to know about many things,” Brice, our education specialist, told me. “Of course there are new and improved ways to teach reading, but they also need to know about preventing violence in the schools – we train them in positive discipline and conflict resolution – and also things like disaster risk reduction.”

We work with the Ministry of Education to develop policy and curriculum.  That sets the framework, “but working with the parents and communities is vital,” added Brice.  “Their participation and leadership is what brings this to life.  This is where change happens.” 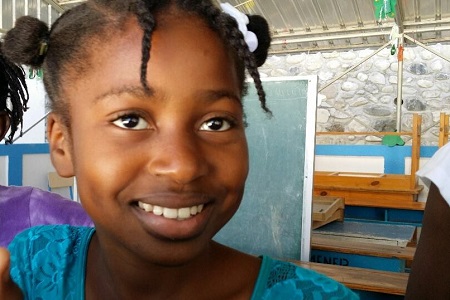 And this is where dreams happen, too.  It is hard, given the image which the world has of Haiti, to think of this country as a place of dreams.  And after the trauma of the earthquake it must have seemed that dreaming for a better future here was futile.  But if this remarkable increase in education can be maintained, those dreams may yet come true.