How Tajikistan responded rapidly to a polio outbreak | UNICEF Canada: For Every Child Skip to main content

How Tajikistan responded rapidly to a polio outbreak

For the first time in decades, we’re witnessing a large sustained backslide in the number of children receiving routine immunizations. In many ways, that’s attributable to pandemic disruptions, but there are other factors at play, including conflict, displacement and increasing vaccine misinformation.

The consequences of this global backslide are potentially fatal. Millions of children right now are at real risk of reemerging devastating diseases, like measles and polio, that are entirely preventable. It’s UNICEF’s mission to make sure these children are reached. 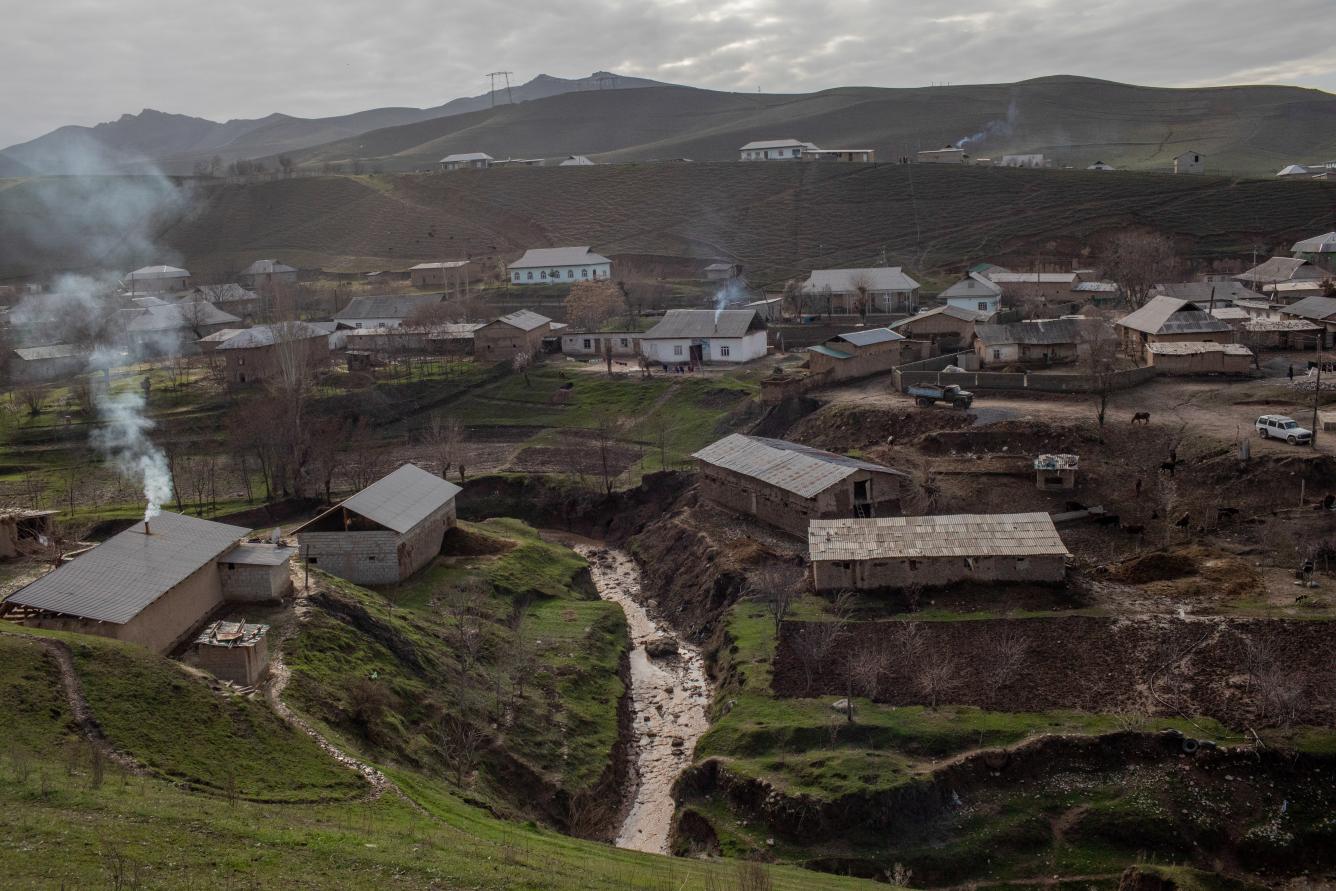 A small river crosses across the village of Sultonobod jamoat in Rudaki District, Tajikistan. [© UNICEF/UN0635996/Babajanyan ]

Tajikistan is one of the countries UNICEF is focusing on

The mountainous nation borders China to its east and Afghanistan to the south. Tajikistan went a decade without a case of polio emerging but that changed at the beginning of 2021, when the first case of paralysis from polio was detected. In the months following, 34 children were paralyzed.

UNICEF, as a partner of the Global Polio Eradication Initiative (GPEI), responded quickly. 4.6 million doses of the oral polio vaccine were shipped to Tajikistan, and working alongside the government, a mass immunization campaign was launched. That initiative has now reached around 1.4 million children. 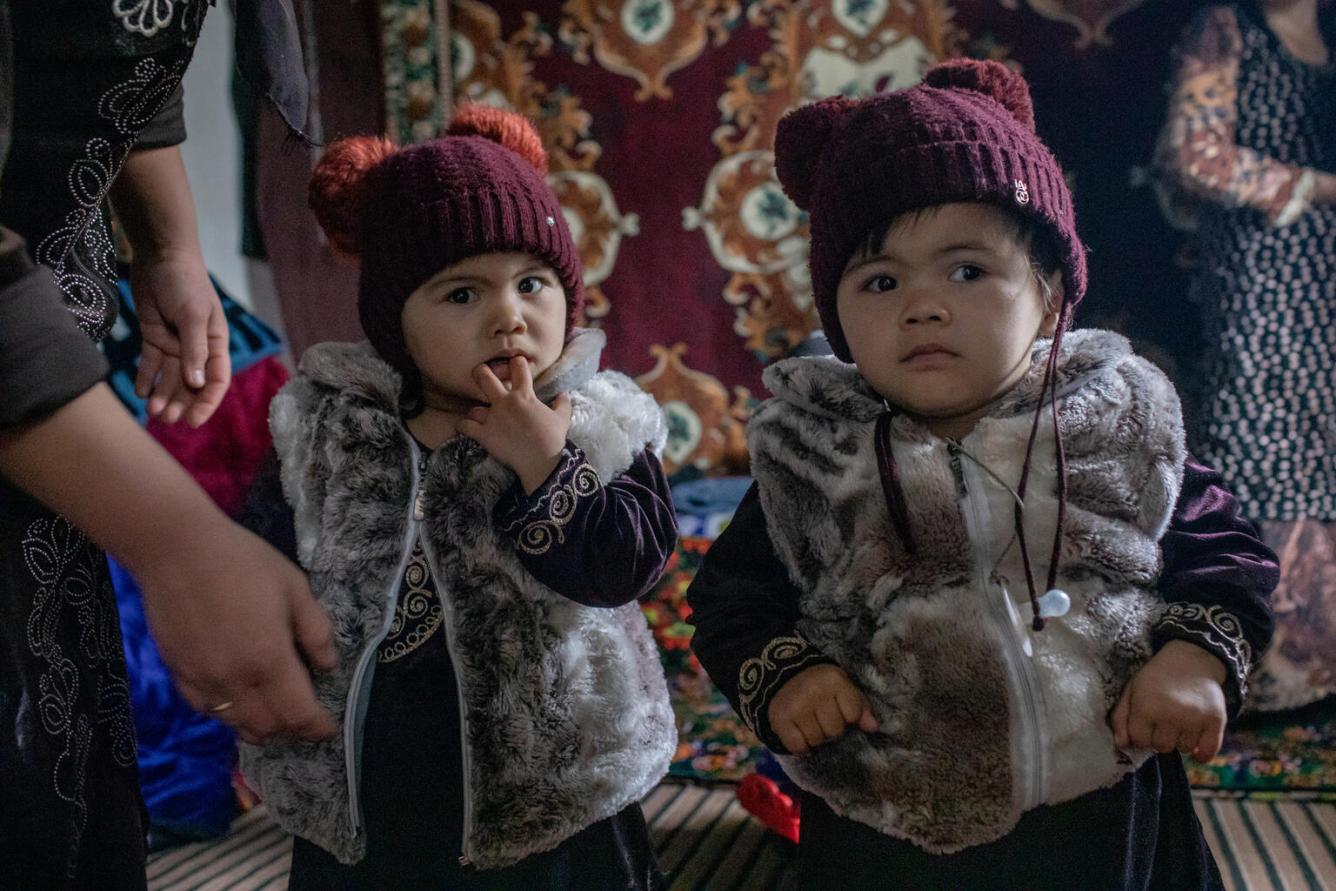 2-year-old twin sisters Fotima and Zuhro are among the children who received their polio vaccines during that immunization campaign. As twins, their father Namazqul says their bond is immediately apparent.

“They are emotionally connected to each other. If one of them has a fever, the other has it too. If one cries, the other cries too,” he reflects. 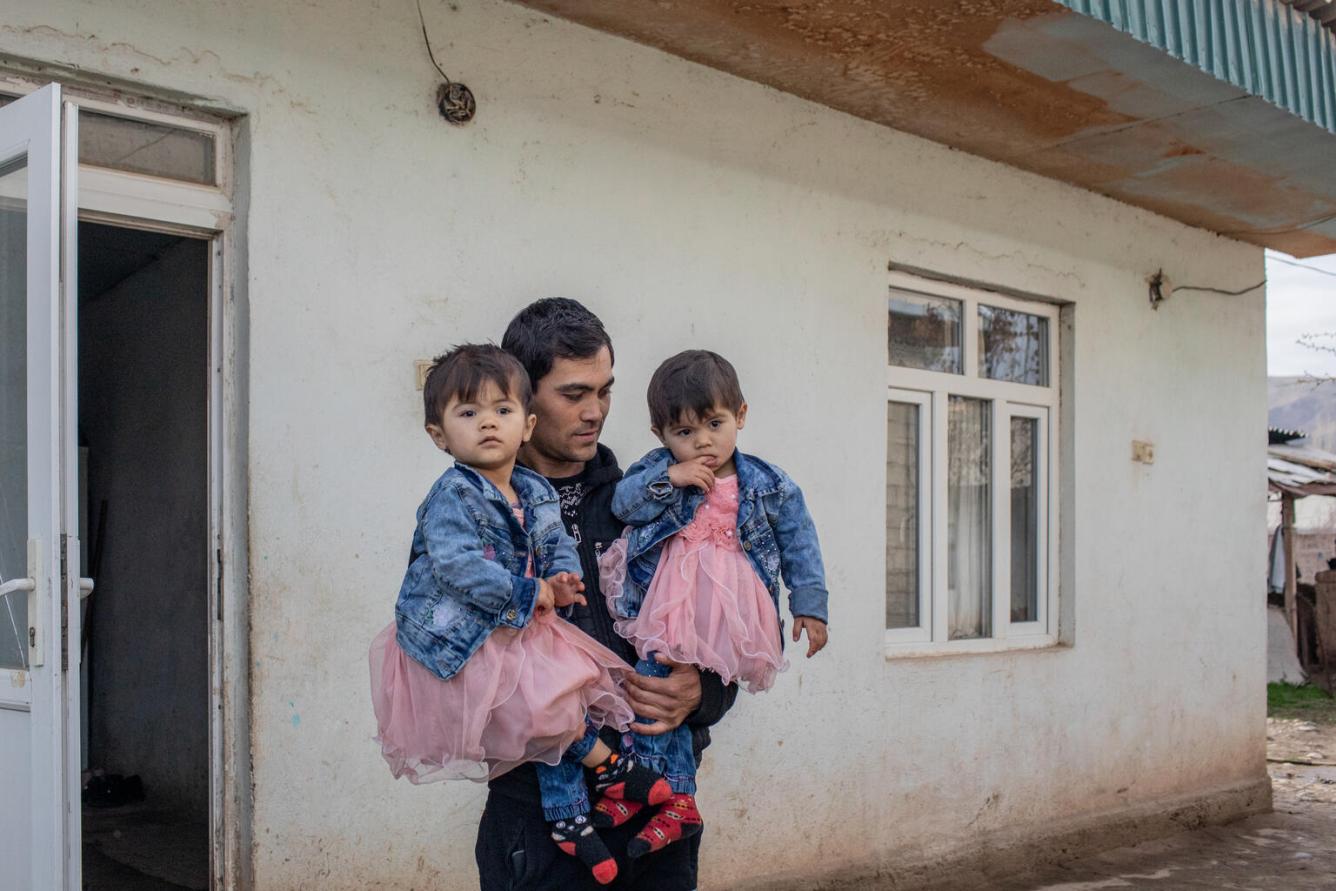 Father Namazqul holds his two daughters outside their home. [© UNICEF/UN0635951/Babajanyan]

Fotima and Zuhro received their first polio vaccines when they were less than a month old and they’re now fully protected.

“The health of our children is very important for us and of course it is important to get these vaccines,” their mother Rahima says. “In spite of COVID-19, they received all their vaccinations in time.” 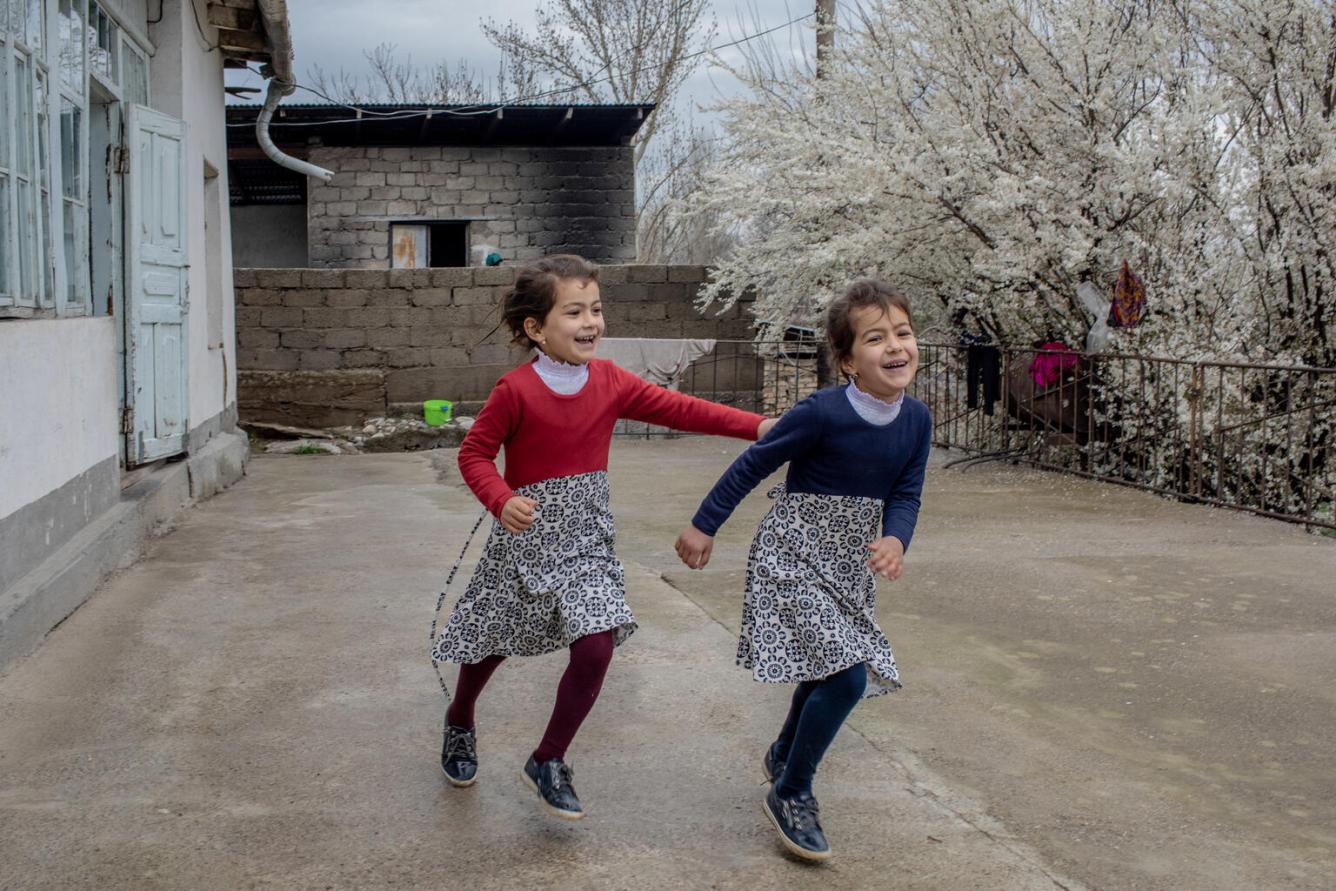 Twins Magfirat and Marifat play outside their home in the Vahdat district of Tajikistan. [© UNICEF/UN0636016/Babajanyan]

A second set of twins are protected

Fotima and Zuhro aren’t the only twins to have been vaccinated against polio. There’s also 6-year-old Magfirat and her sister Maifat. Wearing matching dresses, and with a shared passion for creative endeavors, it’s in some ways hard to tell them apart. 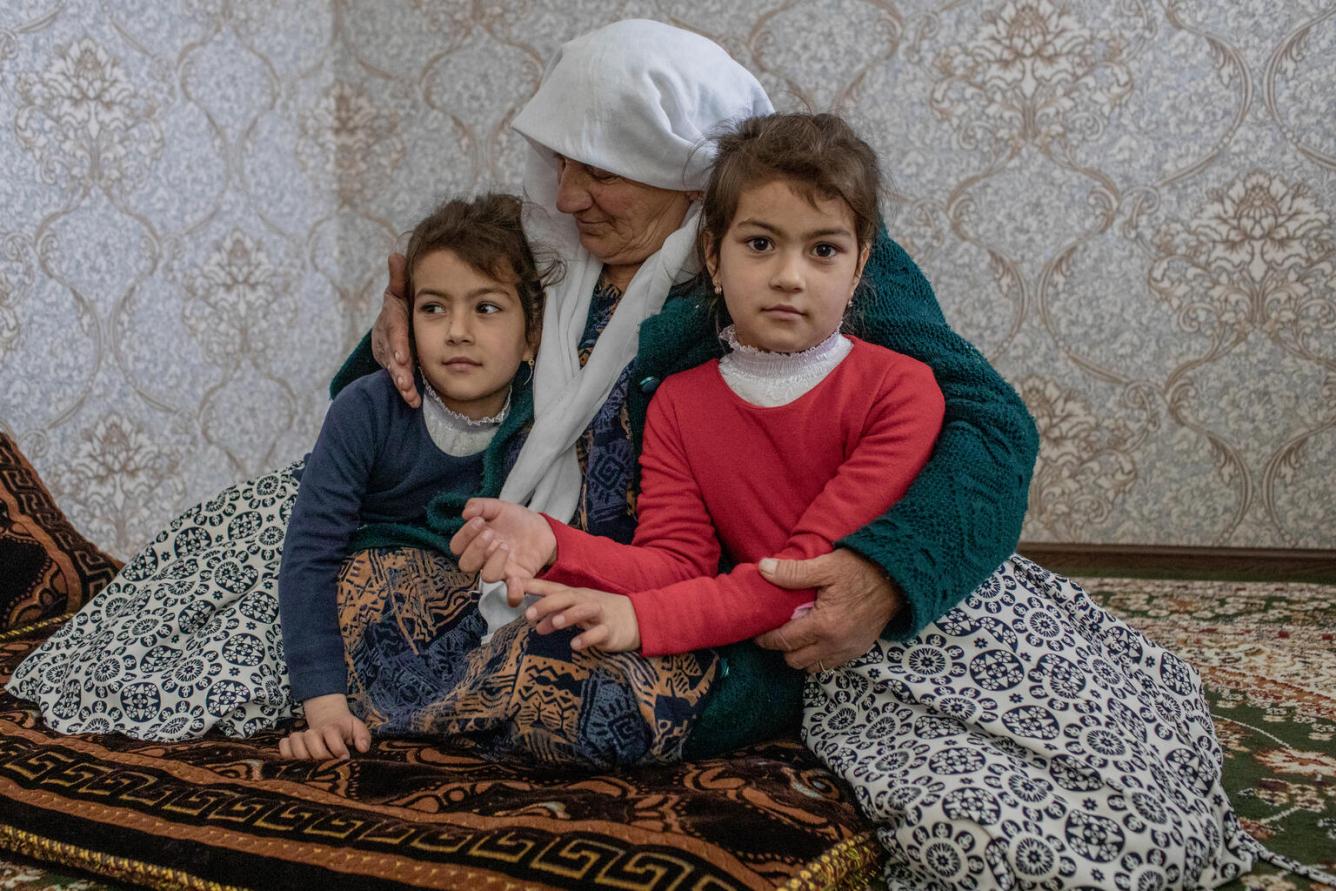 “We love to go to school and our favorite thing to do at school is learning poems by heart, and also drawing,” Magrifat says.

Their grandmother, Shamsiya, has 41 grandchildren. Making sure they’re all protected is paramount. “I advise my children, my daughters-in-law, all family members to be vaccinated, because it’s safe. Their health is very important to me,” she says. 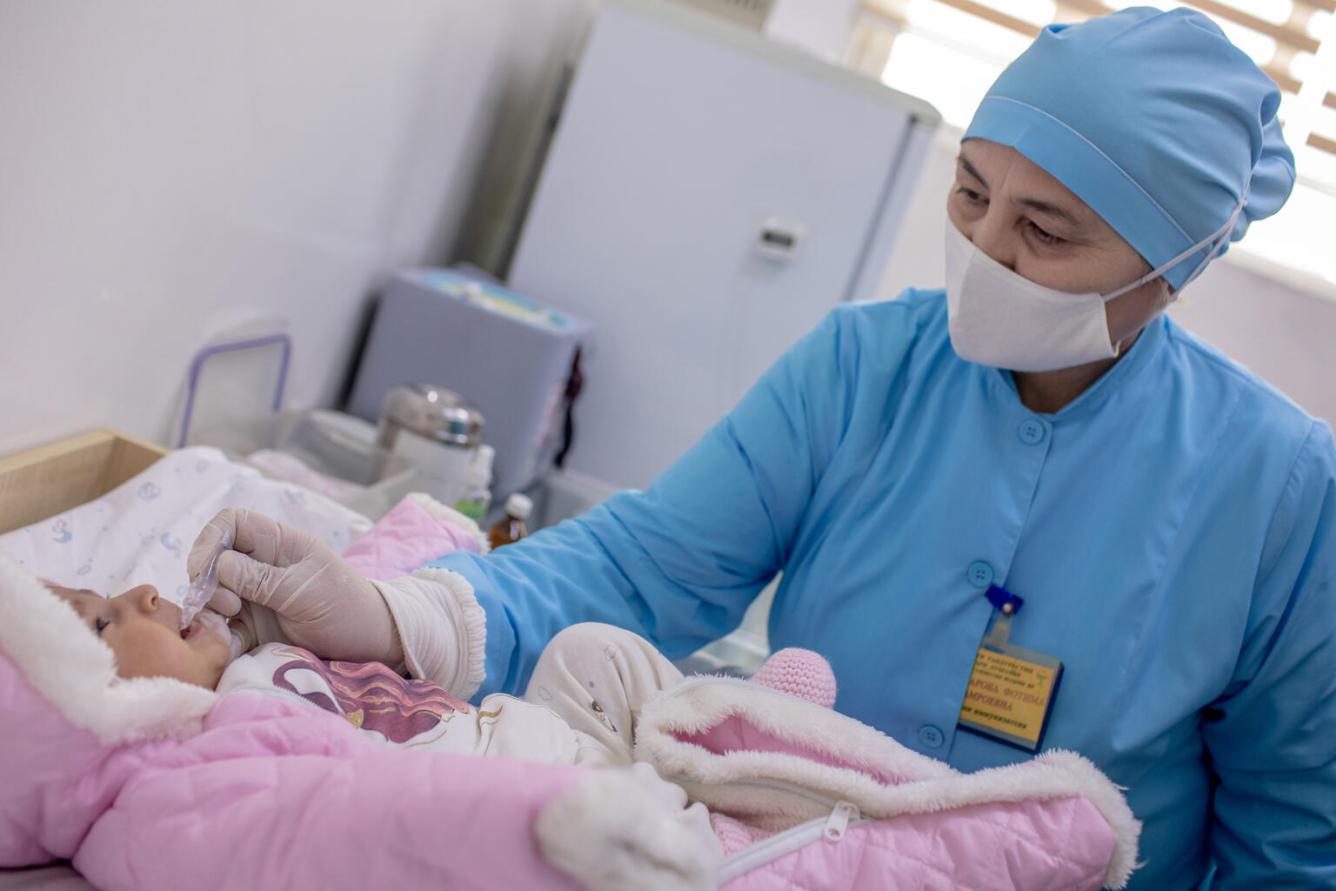 Community health centers in Tajikistan have played an important role in increasing the rate of immunization in the country among children.

That includes the Dushanbe Health Center, situated close to the bank of the Varzob river, which runs directly through the nation’s capital, Dushanbe. 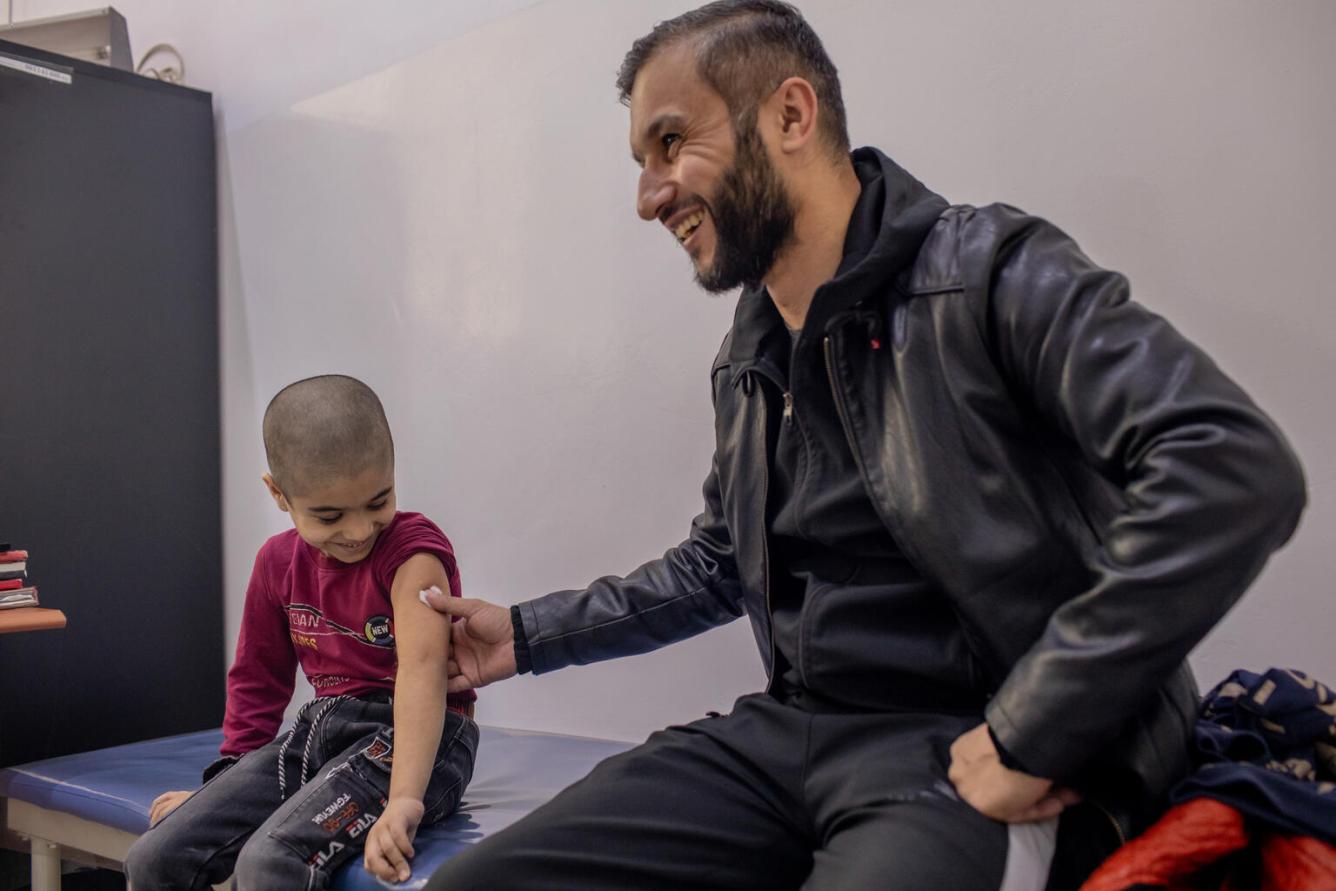 6-year-old Muso Ahliddinzoda gets vaccinated with his father at the Dushanbe Health Center. [© UNICEF/UN0635915/Babajanyan]

It’s here that nurse Fotima Qalandarova has been busy recently. “We vaccinate both adults and children,” she says. “When the pandemic started, we had some issues, many did not bring their children. But now it is back to normal.” 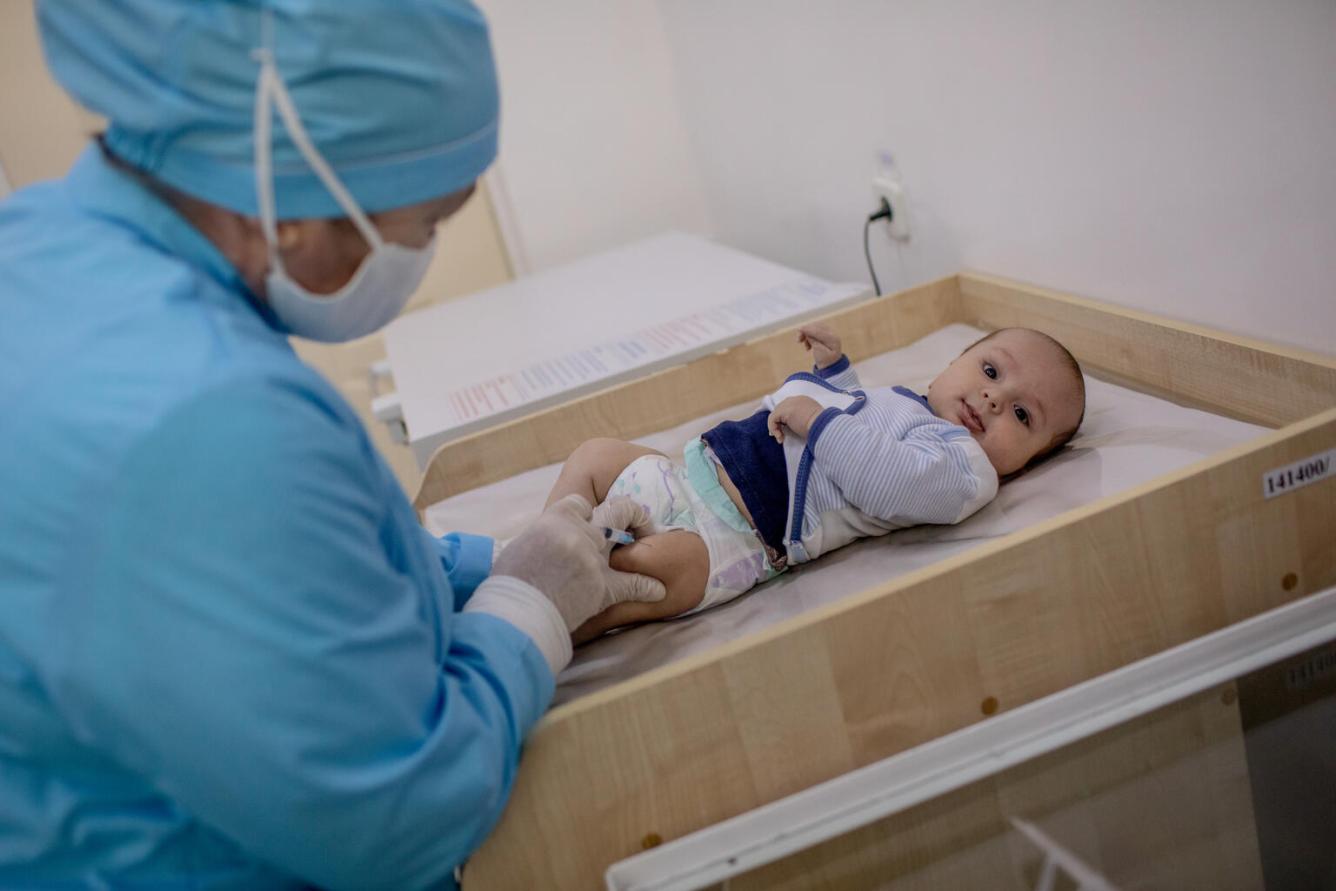 Bobojon Valiev, who is 2-months-old, gets vaccinated at the Dushanbe Health Center. [© UNICEF/UN0635898/Babajanyan]

One of her patients is 2-month-old Bobojon. He’s receiving his second dose of the polio vaccine, which comes as a big relief to his mother.

How the COVID-19 pandemic presented an additional challenge

Because of COVID-19, health workers at the Dushanbe Health Center had to rethink how exactly they provided healthcare while keeping everyone safe. 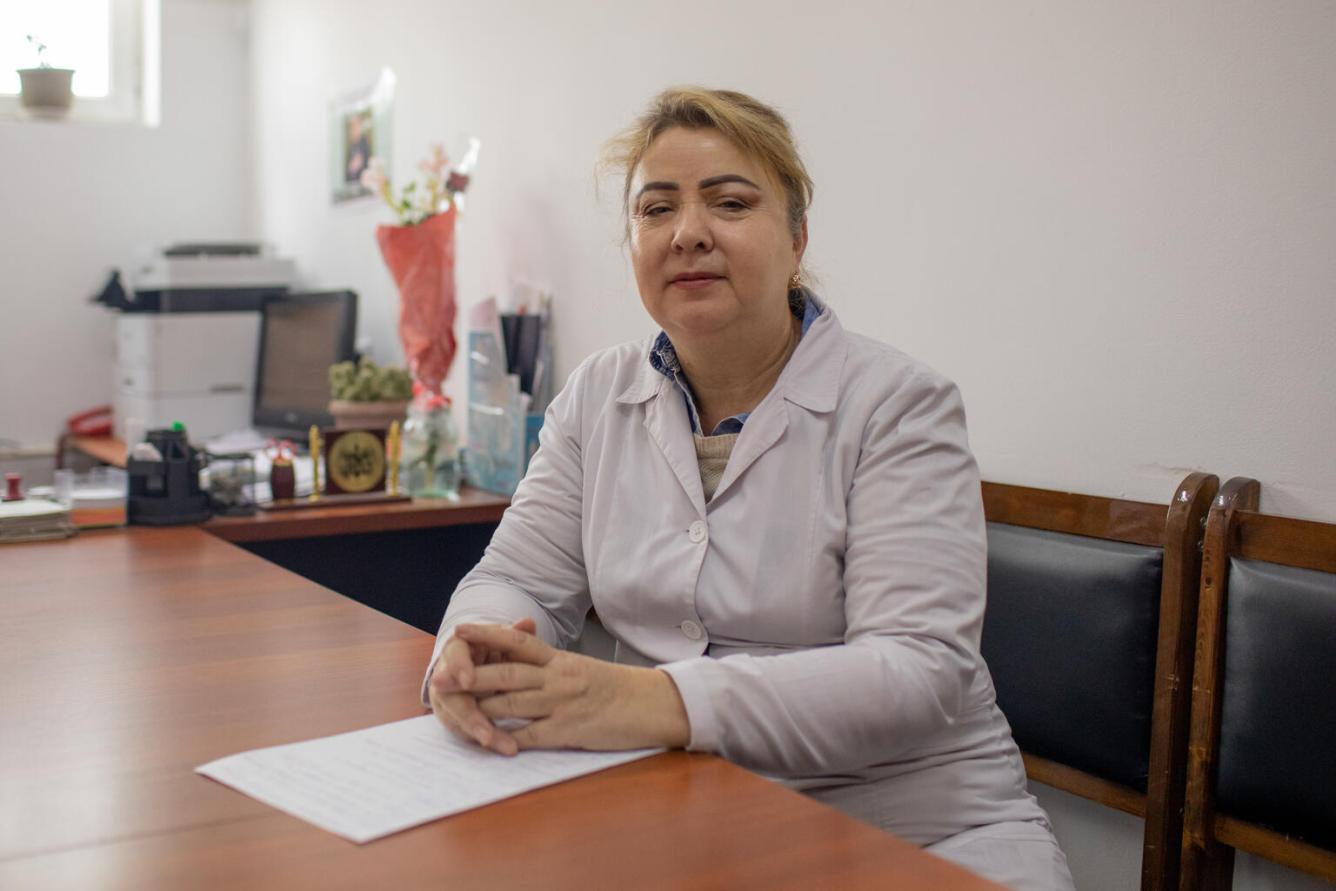 While contending with the threat of a polio outbreak, these health workers were at the same time faced with the incredible challenges the pandemic posed.

“It was hard during the pandemic, but when the COVID-19 vaccines appeared, I was very happy. It gave us hope that life was continuing, that it would not be as difficult as it was in the beginning," says Mamadjonova. 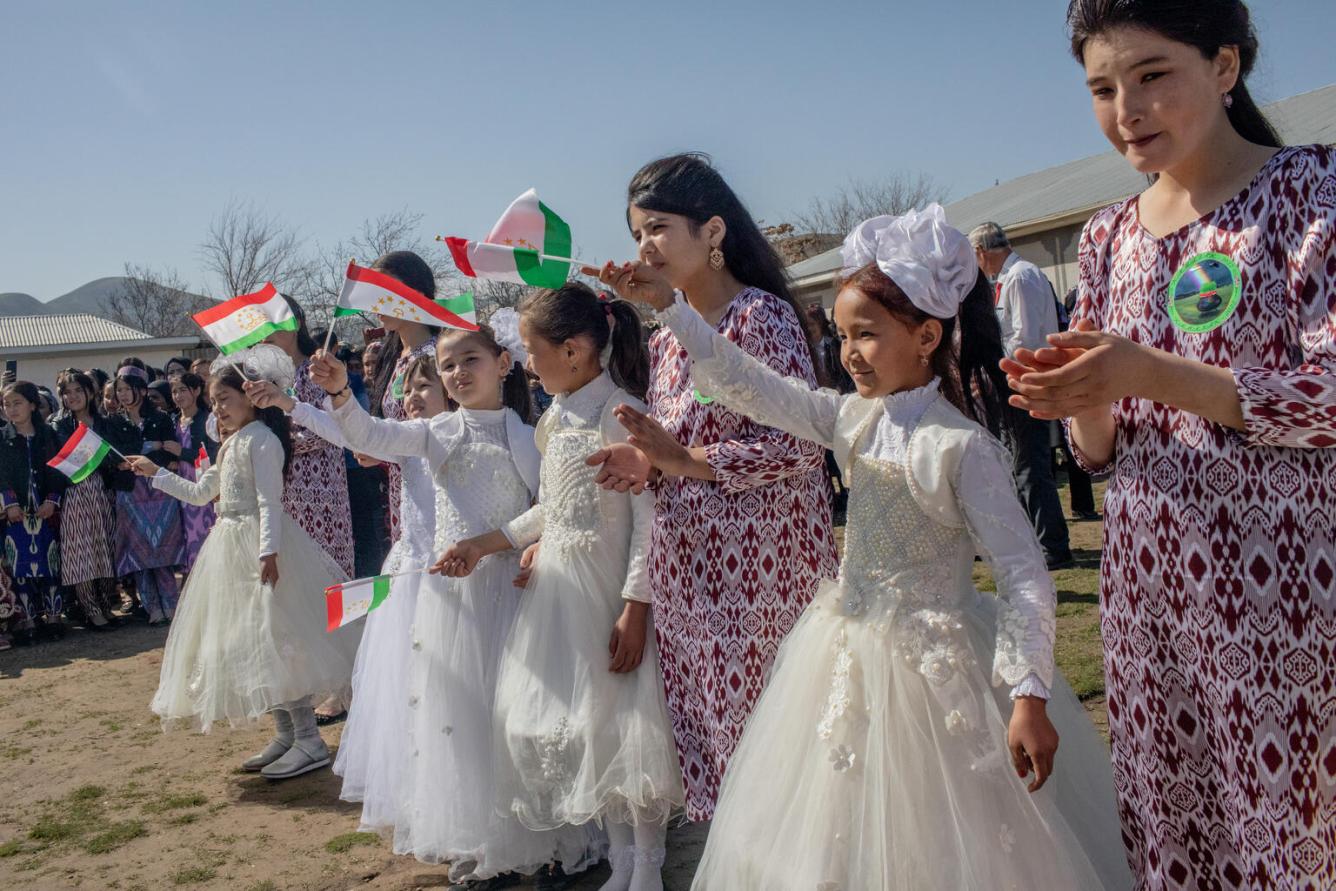 Navruz celebrations, which mark the beginning of Spring, take place at a school in the village of Burmai Poyon. [© UNICEF/UN0636063/Babajanyan]

The results of Tajikistan's vaccination campaign are clear

Thanks to the hard work of these health workers, the willingness of so many caregivers to get their children vaccinated, and the efforts of UNICEF alongside its partners, in addition to the Tajikistan government, the future now looks brighter. As of April 2022, the World Health Organization declared that polio is no longer circulating in the country.