Through pandemics and epidemics, hope stays alive | UNICEF Canada: For Every Child Skip to main content

For more than 70 years, we have been working to improve the lives of children and their families. Our mission is made possible by a strong network of talented and dedicated staff that includes physicians, clinicians, logistics experts and communication specialists.

As the global COVID-19 pandemic unfolds, we look back at UNICEF's history of responding to health crises the world over, and look ahead to recovering from this one. 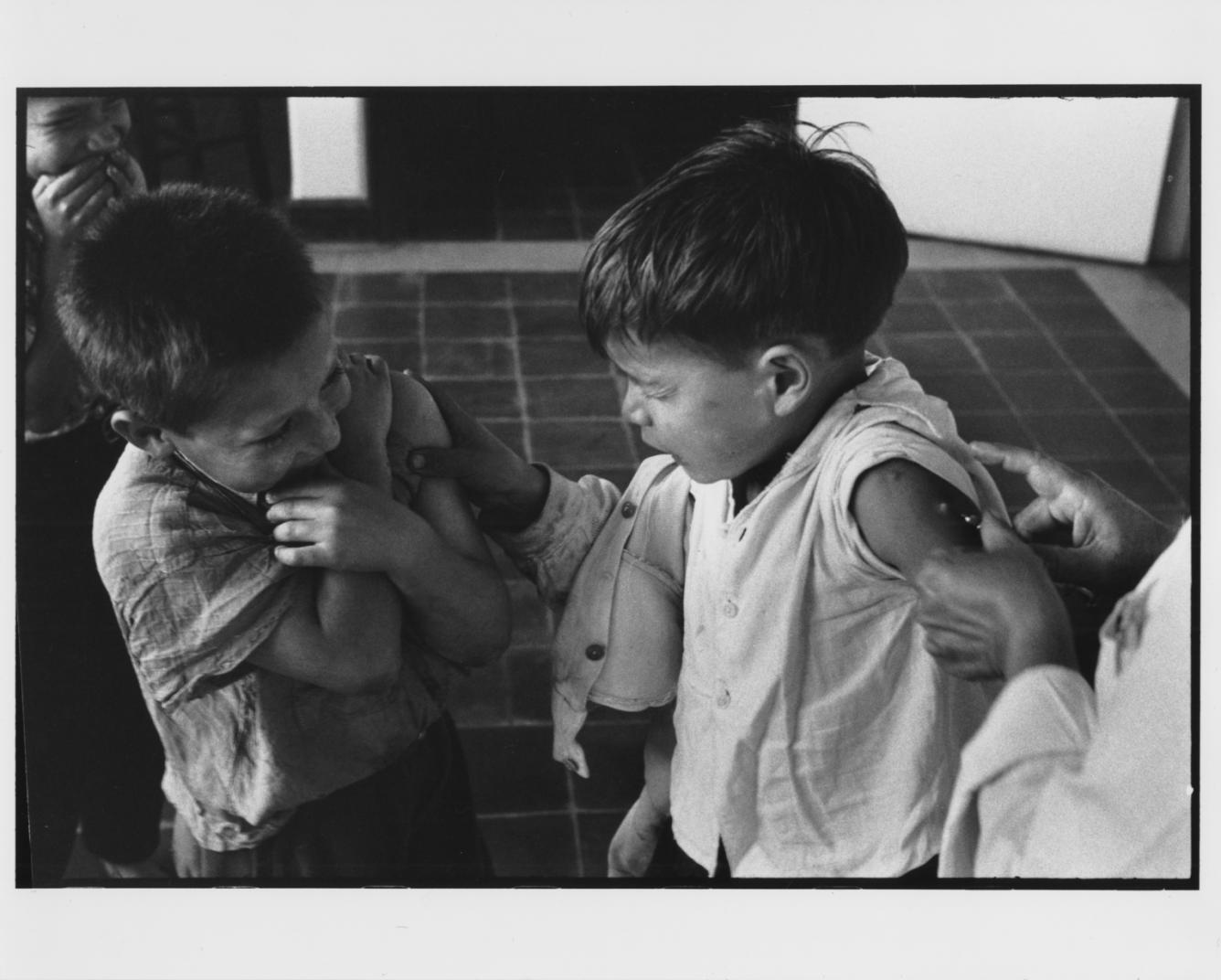 Colombia, 1959: The momentary sting of needle can mean years of protection against tuberculosis for children receiving BCG vaccination. [© UNICEF/UN04164/Unknown]

Since its beginnings, UNICEF has been at the forefront of disease prevention and revolutionizing children’s health.

Working closely with partners like the World Health Organization (WHO), we have seen the eradication of smallpox and the near eradication of polio. Since 1988, the number of children affected by polio has reduced by 99 per cent.

Today, some of the same lessons we’ve learned in contact tracing in communities are being applied to reach vulnerable children and their families in some of the remotest parts of the world.

In the 1980s UNICEF led the child survival revolution — a shift from treating health issues to preventing them — helping to reduce child deaths by up to nearly 80 per cent in some countries. Our worldwide distribution of oral rehydration solution has helped reduce the number of deaths from diarrhoea — a leading killer of young children — by 60 per cent between 2000 and 2007.

Mass immunization campaigns have also played a huge role in protecting children against preventable diseases. For measles alone, about 20 million young people’s lives were saved between 2000 and 2015 thanks to such efforts by UNICEF and partners.

In 1987, AIDS became the first disease to be debated on the floor of the UN General Assembly. As Member States convened, UNICEF and WHO were already monitoring possible interactions between the disease and immunization and breastfeeding.

As infections spread, UNICEF geared its research, policy, planning and fundraising to better understand how to prevent mother-to-child transmission. To equip the public with facts, we supported health education around the world, particularly in sub-Saharan Africa, working tirelessly to inform, educate and protect against stigma and discrimination around HIV and AIDS. 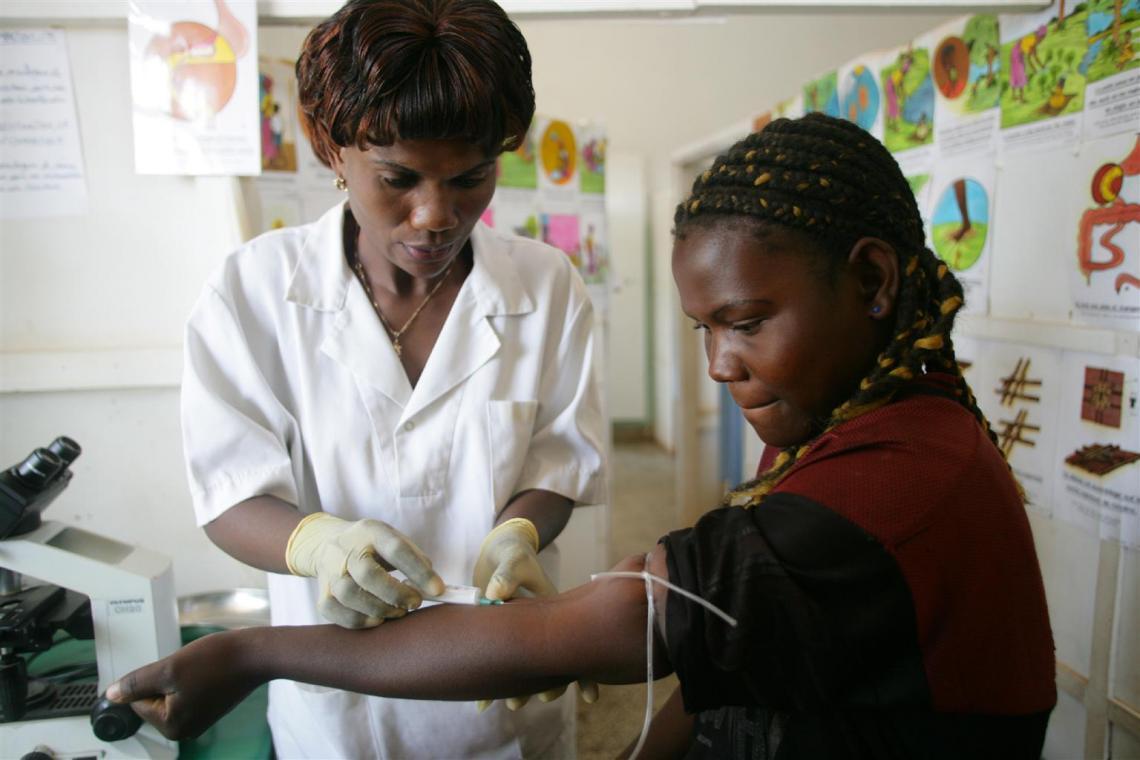 Democratic Republic of the Congo, 2005: A health worker draws blood for an HIV test at a health centre where UNICEF is supporting prevention of mother-to-child transmission programmes. [© UNICEF/UNI44463/Pirozzi]

Since 2010, 1.4 million HIV infections among children have been averted. The reduction in mother-to-child transmission is viewed as a public health success story. Jointly with partners, UNICEF has set ambitious targets for ending AIDS by 2030. 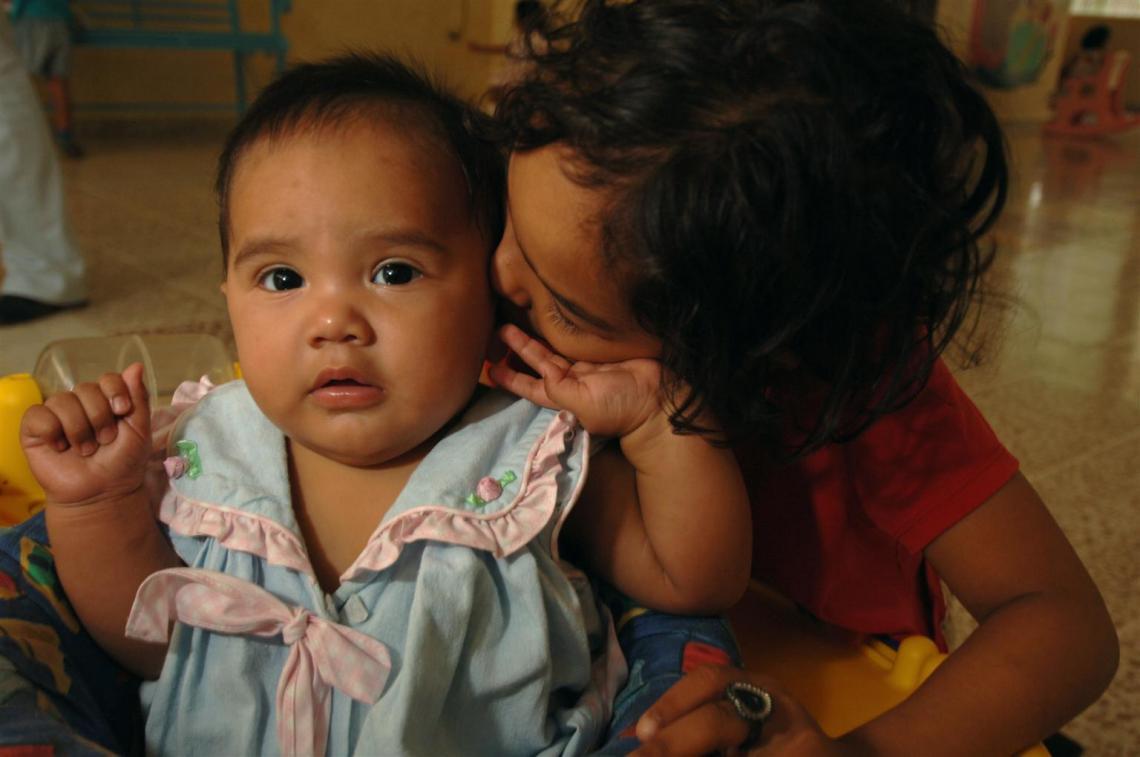 Honduras, 2008. A toddler and baby hug at a UNICEF-supported home that shelters children living with HIV who have lost their parents to AIDS. [© UNICEF/UNI44079/DeCesare]

In 2009, the swine flu pandemic swept across the world primarily affecting children and young adults who were otherwise in good health. UNICEF put measures in place to prepare for possible local outbreaks in 90 countries. These measures remained in place after the pandemic with an eye on future outbreaks. 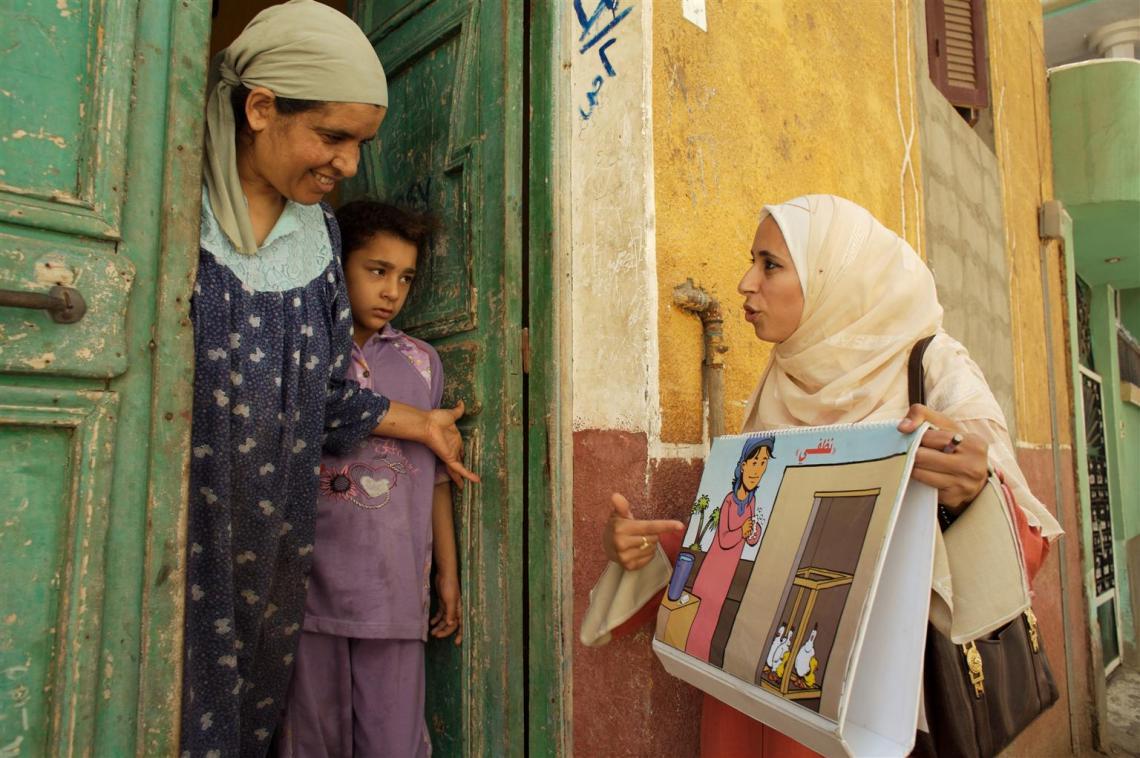 Within two and a half years of the 2014 outbreak of Ebola in West Africa, more than 28,616 cases and 11,310 deaths had been recorded. During the crisis, UNICEF helped in providing care for ostracized children suspected of being infected, children who lost parents and guardians to Ebola, and the millions who were out of school.

Since 2018, with the start of the second-biggest Ebola epidemic ever recorded, we have been working with partners across the region to prevent transmission and protect affected children. Within a year, UNICEF and partners had trained more than 32,400 teachers on how to teach children about Ebola prevention and how to make schools a protective environment. 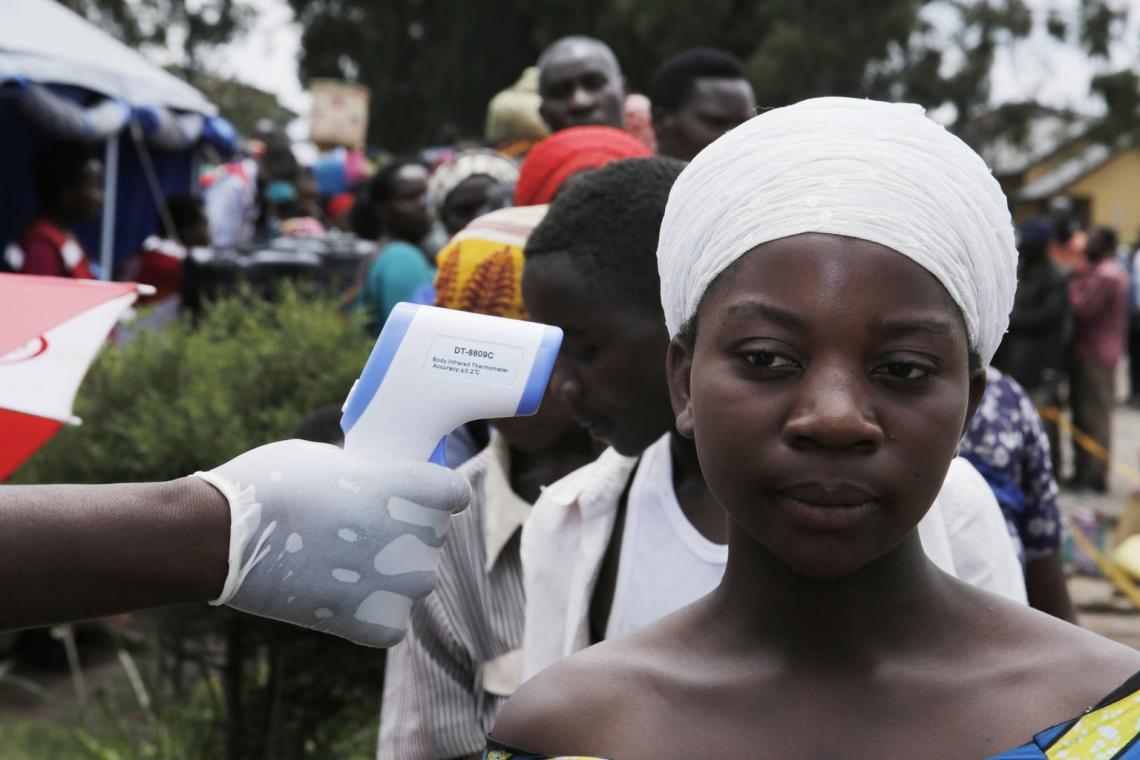 Uganda, 2019. A health worker takes the temperature of people lined up at a screening facility at the border with the Democratic Republic of the Congo. [© UNICEF/UN0307794/Adriko]

The ongoing COVID-19 pandemic has upended family life around the world. Economic shutdowns, school closures and confinement measures are all having a heavy impact on children now and the longer-term repercussions risk their safety, their well-being and their future.

UNICEF is calling for swift global action without which, this health crisis risks becoming a child-rights crisis. 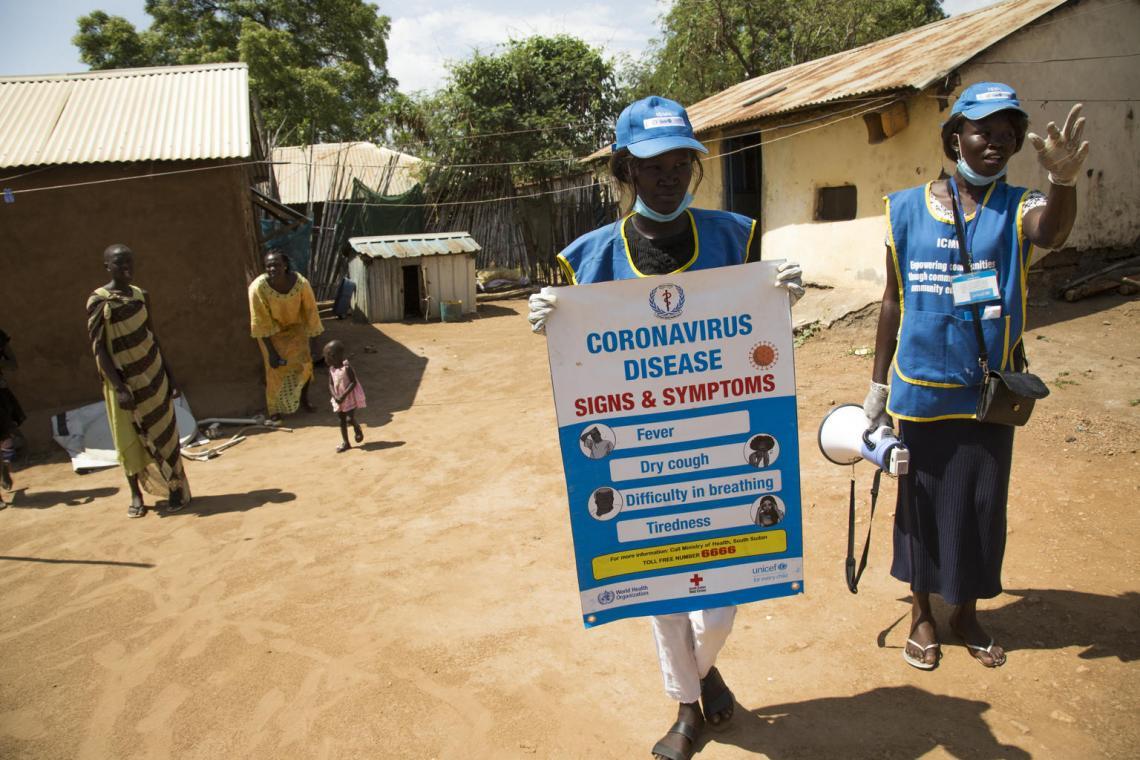 South Sudan, 2020: UNICEF has a network of 2,500 mobilisers working around the year to raise awareness on the importance of hygiene, immunization, nutrition, protection of children and education. [© UNICEF/UNI317957/Chol]

UNICEF is on the ground in more than 190 countries, partnering with governments, health workers and other front-line responders to keep children healthy, safe and learning, no matter who they are or where they live.

COVID-19 is one of the biggest fights in our history, yet, it is a fight that together we can win. Are you with us?